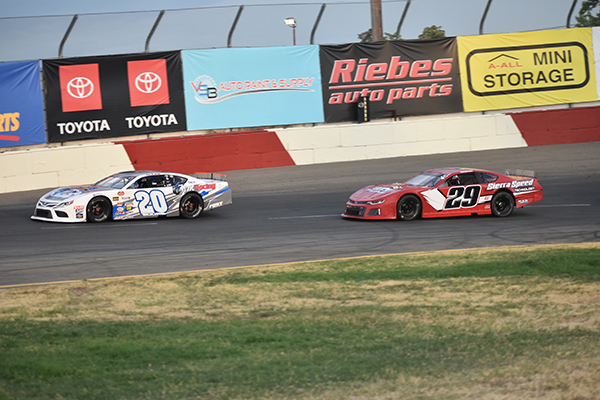 ROSEVILLE, Calif. (March 23, 2021) – NASCAR racing roars back into Roseville this weekend with the 2021 opening night for the NASCAR Advance Auto Parts Weekly Series at All American Speedway. A full lineup of stock car action is on tap for the one-third mile including NASCAR Late Model twin main events, Modifieds, Super Stocks, F4s, Jr. Late Models, and Mini Cup/Bandos, plus the debut of the inaugural race for the BMR Drivers Academy. Eight main events will be featured on Saturday night live at www.AllAmericanSpeedway.TV part of the SPEED SPORT NETWORK.

Saturday’s events are closed to the public due to state and county COVID-19 guidance. Racing begins at 5:15 p.m. Pacific on Saturday. All American Speedway officials are planning for the return of race fans on April 10, with ticket details available soon!

The Drivers Academy will also race on Friday night with a green flag at 6:30 p.m. Pacific. Both days of action are available as part of a monthly Pay-Per-View package, which includes both live and on-demand viewing options.

Twin NASCAR Late Model 35-lap races on Saturday kicks off their quest towards the NASCAR California state title and the new NASCAR regional title. Drivers throughout the west will battle for their best 14 finishes, with the champion earning $15,000 and the top-ten in the region each earning significant cash awards at the end of the season. A $3,500-to-win track championship is also being offered.

A growing contingent of drivers will be in action in the NASCAR Modifieds with 30-laps of competition scheduled. Sacramento’s Jason Philpot won both the Roseville and Ukiah championships during an outstanding 2020 season but will face a host of drivers trying to climb the ladder to victory lane.

Andrew Peeler of Carmichael enjoyed a strong campaign in 2020 in the NASCAR Super Stocks on the way to the championship as well. Peeler staged a classic duel with Roseville’s Roy Smith in the non-points season finale to end the year in October, perhaps serving as a precursor for the upcoming year.

Roseville’s Ray Molina flipped his F4 car at the conclusion of the 2018 season. He has gone on to win back-to-back championships in the four-cylinder powered division. Several exciting rookies are joining the division with a 25-lap main event this weekend.

Pit gates open at 10:30 a.m. on Saturday with BMR Drivers Academy practice at noon. NASCAR Weekly practice begins at 1:00 p.m. Time trials take place at 3:00 p.m. followed by a brief 15-minute final practice session. Opening ceremonies are at 5:15 p.m. with all eight main events to follow, live on www.AllAmericanSpeedway.TV Friday’s activities include pit gates swinging open at 2:30 p.m. with practice until 8:00 p.m. The BMR Drivers Academy will have its main event at 6:30 p.m. that will also be available for online viewing.

All American Speedway wants to thank @the Grounds for their support along with partners such as A-All Mini Storage, Jaws Gear & Axle, JM Environmental, Sinister Diesel, and Riebes Auto Parts for making this season possible. Companies interested in supporting these events can contact All American Speedway at (916) 786-2025. Without competitor support and local community partners, these events would not take place.