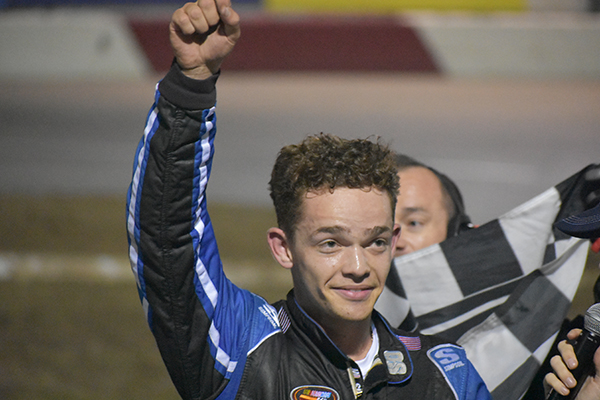 ROSEVILLE, Calif. (November 3, 2019) – Cole Moore drove to the biggest victory of his career at the All American Speedway powered by Roseville Toyota, holding off 2019 track champion Jason Romero for Saturday’s $10,000 to win JM Environmental 100. Moore’s win closed the season in Roseville, with race fans treated to seven main events of competition at the one-third mile speedway.

Moore used the outside line on several restarts to power his way to victory. He led the final 94 laps while fending off challenges from both Romero and Jeremy Doss, a 12-time winner in California this year.

Doss set the standard earlier in the afternoon with a new track record at 13.968 seconds. He led four drivers into the 13 second mark with each running underneath the previous track record. A straight up start placed Doss on the pole which he used to dart ahead of 2018 Highline 150 winner Buddy Shepherd of Bakersfield. Moore battled briefly with former NASCAR West Series champion Eric Holmes before grabbing second position on lap three. The caution flew for Michael Mitchell and Cole Brown tangling in turn one. Holmes pitted with a flat right front tire which eventually led to further problems which ended his night.

Doss started inside Moore on the restart, allowing Moore to roar past for the lead on lap seven. Tenth starting Romero moved ahead of John Moore for fifth by lap 17. Romero then used a restart to pass Matt Erickson for fourth. Reno’s Randy Hedrick hit the turn one wall for the next caution on lap 38. The next restart attempts saw separate cautions for spins in turn one and on the backstretch.

Romero used these restarts to advance to third, with the trio of Moore, Doss, and Romero running nearly nose-to-tail through lapped traffic on lap 64. Erickson slammed into the turn three wall for the next caution on lap 67. Shepherd ran the outside line to swoop past Romero for third. Romero then took the position back while Doss hounded the back of Moore. Romero’s car picked up steam on the long run, taking over second position on lap 85. Romero closed within a few car lengths, then lost ground in traffic with five to go. Cole Moore took the checkered flag followed by Romero, Doss, Dylan Zampa of Napa, and Shepherd.

A season-best 22 cars started the 50-lap Super Stock feature for $1,000 to win. An exciting finish capped off the highly competitive main event. An eight-car inversion allowed Roseville’s Jeremy Fritts to lead the event. Stockton’s Ty Carlson spun in turn four for a caution on lap eight.

Roseville’s Dan Farrington used the outside to get past Tim Walters of Dixon for second on the restart. Farrington then looked inside Fritts, taking the lead on lap 16 as Fritts slid up the track. Spins for Ericka Ray and Fritts brought out cautions near the halfway point of the race. These cautions allowed eighth starting Byron Gonzales to enter the picture.

Gonzales went outside Farrington to lead lap 34. Billy Ray and Simi Tour hooked together and slammed into the front stretch wall, ending Ray’s night. On the restart, Tim Walters was spun from the fourth position. Farrington went around the outside of Gonzales to retake the lead on lap 44. He maintained the lead through lapped traffic as well.

Sacramento’s Jason Philpot made a rare Limited Modified start a successful one, winning the 25-lap event for $1,000 to win. Philpott advanced to third position quickly while Lincoln’s Mike Gorham led the way. Philpott worked his way past Cloverdale’s Tyler Caturegli for second, then pounced on Gorham to lead lap six. October 12th winner Eric Price, Jr. was the fast-time qualifier on Saturday night but was not able to make it through the pack in time. Philpot topped Price, Caturegli, Keith Bloom, Jr., and Gorham at the finish.

After tying for the 2019 Stockton 99 Speedway championship, Joe Flowers and Joshua Cross dueled ahead of an 18 car F4 field in Roseville on Saturday night. Citrus Heights’ Vic Theberge took the lead from Manteca’s Danny Helm on lap five. On the following lap, Flowers took over. Cross quickly followed into second position.

Cross chased Flowers through lapped traffic during the non-stop race. Cross led lap 18 before he broke out below 16.5 seconds and had to surrender the lead back to Flowers on lap 20. Flowers led the rest of the way for the $400 victory with Cross taking a $300 second. Roseville’s Ray Molina, the 2019 track champion, fell to seventh around the halfway mark with an apparent mechanical problem. Molina came back to finish third followed by Reno’s Rich Innis and Roseville’s Matthew Fuhs.

A season-best nine Jr. Late Models competed in a 30-lap event with a first-time winner as a result. The inversion saw Colorado’s Holly Clark and Stockton’s Joey Stearns on the front row. After a lap side-by-side, Stearns slid off turn two into the side of Clark’s machine. Clark spun head-on into the backstretch wall to end her evening. Orangevale’s Calvin Hegje inherited the lead but lost it quickly when Redwood Valley’s Kyler Berry went past him on the outside.

A pair of spins on each end of the race track allowed San Jose’s Jay Juleson a shot at Berry, but Berry picked the outside lane and maintained the top position. Berry earned his first career Jr. Late Model win ahead of Juleson, fast-time qualifier Cole Brown of Ukiah, 2019 champion Brody Armtrout, and Aidan Daniels.

Kenna Mitchell of Loomis added to her 2019 Bandolero championship season by winning the 25-lap season finale. 2019 runner-up Trey Daniels finished second in the race with Hannah Ray rounding out the podium. Dixon’s Richard Lavallee won the Riebes Auto Parts Trailer Bash for his third consecutive “destruction” win in the last three weeks. Lavallee earned $1,000 while Chase Moore was the Master of Disaster winner.

All American Speedway will celebrate the 2019 season on January 18, 2020 with the championship awards banquet. More details will be posted when available at: www.AllAmericanSpeedway.com