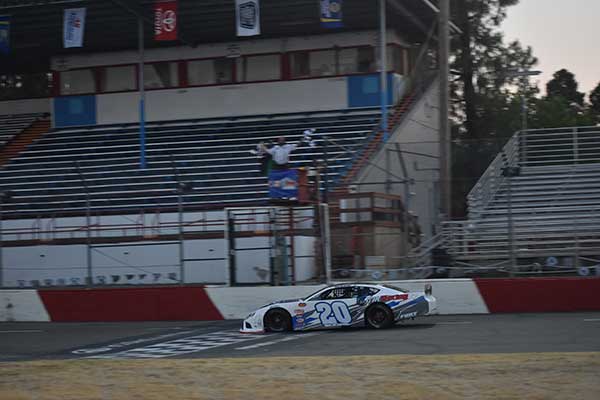 ROSEVILLE, Calif. (August 1, 2020) – Granite Bay’s Cole Moore continued where he left off nine months ago, returning to victory lane in the return of NASCAR Late Model racing to All American Speedway in Roseville on Saturday night. Moore swept the twin 35-lap features as part of a seven main event program, marking the first action at the speedway since November.

Moore won the $10,000 to win JM 100 to wrap up the 2019 season. Saturday’s events were run without fans in attendance and streamed to AllAmericanSpeedway.TV

Moore led time trials but started eighth in the first feature due to the inversion. Modesto’s Mike Beeler started outside pole and swept past Roseville’s Shannon Mansch to lead the opening lap. The first caution flew on lap eight. Beeler restarted from the inside row and maintained the lead over Lance Halm. Halm fell back to seventh on the outside line, while Moore passed Chris Scribner for second on lap 15.

On lap 20, Moore took over the lead from Beeler with a pass on the inside. The caution flew on lap 27 and Scribner used the restart to nab second from Beeler. A caution on lap 29 saw Moore restart inside Scribner. Scribner slowed on the backstretch after the green flag. He continued slowing out of turn four, sparking a melee that ended the evening for both Halm and Cameron Legue of Roseville. Scribner continued in the race, however. Moore drove ahead over the final restart, leading Beeler, Matthew Wendt of Galt, Mansch, and Scribner the top-five.

The second 35-lap feature saw JJ Ferguson and Hans Beeler struggle to get the race off the ground. After a pair of failed attempts that included Ferguson spinning with contact from Gracie Trotter, Mansch was moved up to the pole position alongside Scribner. Scribner charged past her to lead the opening lap while Moore and Wendt both passed Mansch around the outside on the following laps to drop her to fourth.

Trotter had to stop with her hood coming up onto the windshield of the car, bringing out a caution. The yellow flag allowed Moore a shot to go around the outside of Scribner, taking over on lap eight. Wendt moved into second on lap 14 but could not close on Moore throughout the final 21 laps. Cole Moore won his third consecutive Late Model main event ahead of Wendt. Both Beeler and Trotter passed Scribner in the closing stages of the event to round out the top-five.

Jason Philpot of Sacramento led all 30-laps for the Jaws Gear & Axle NASCAR Limited Modified win. A caution on lap 15 saw Josh Blackwood try to go up the inside of Michael Mitchell for second but he spun in the process. The race remained green with Philpot topping Mitchell, Don Shalla, Blackwood, and Jon Yourd.

Rich Innis of Sun Valley, NV held off 2019 F4 champion Ray Molina for the 25-lap season opening win. Rookie Nathan Cleaver led the first three laps before Dennis Crook of Fernley, NV assumed the lead. Molina moved from eighth to second by just the eighth lap of the race. Molina and Crook made contact for the lead in turn four, drove onto the apron, but kept going. Innis took advantage of the situation to nab the top spot.

Molina ran down Innis in lapped traffic and tried to make passes on both the inside and outside to no avail. Rich Innis won the F4 feature over Molina, Jerry Nunes, Crook, and Matthew Fuhs.

Jill Schimdt claimed fast-time and the Super Stock victory over a ten-car field. The 30-lap feature was led early by Lodi’s Brandon Diede. Phil Wilkins and 2019 champion Andrew Peeler both went around the outside of Diede with Wilkins leading lap six. Peeler then took the lead from Wilkins on lap 11 restart. Schmidt hounded the back bumper of Peeler, then knifed underneath to lead lap 20 before the caution flew for a spin in turn two.

Schmidt defended a brief challenge from Peeler on the restart to win the main event. Dixon’s Tim Walters, Wilkins, and Antelope’s Chris Paulson were the top-five finishers.

Aidan Daniels of Fort Bragg continued his winning ways in the Jr. Late Model division. Both Fort Bragg’s Lane Anderson and Loomis’ Kenna Mitchell took turns with the lead but each spun. Daniels took over the top spot as a result and led Anderson and 2019 Bandolero champion Kenna Mitchell across the stripe. 2019 Bandolero runner-up Trey Daniels made his Jr. Late Model debut from fourth.

Mitchell also won the Mini Cup vs. Bandolero ahead of Bella Thomsen.

All American Speedway continues its NASCAR Advance Auto Parts Weekly racing on August 15th with NASCAR Late Model Twins, Jaws Gear & Axle Limited Modifieds, Super Stocks, F4s, Jr. Late Models, and Mini Cup/Bandoleros. They will be joined by the JM Environmental 150 for the SPEARS SRL Southwest Tour. The NASCAR portion of the event will be available to live stream via www.AllAmericanSpeedway.TV A replay of Saturday night’s races is available for purchase as well.