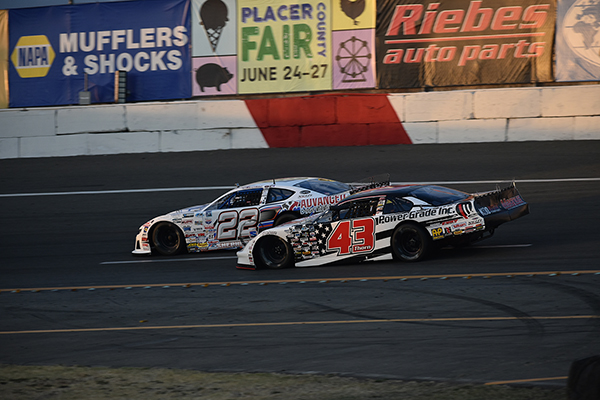 ROSEVILLE, Calif. (September 13, 2021) – A triple threat of touring stock car action invades All American Speedway powered by Roseville Toyota this Saturday night, with nearly 300-laps of competition on the one-third mile oval. The SPEARS SRL Southwest Tour competes in the Nut Up 125 along with racing for the Spears Manufacturing Modified Series, SPEARS Pro Late Model Series, and BMR Drivers Academy. Bakersfield’s Derek Thorn is the most wanted man in the Tour with a bounty on the line if a driver can defeat him on Saturday night! Photo by Don Thompson

Grandstands open at 4pm followed by time trials for the SPEARS SRL Southwest Tour. Opening ceremonies will be at 5pm with all four feature events to follow. Tickets are available online only at www.AllAmericanSpeedway.com All seats are general admission, priced at $20 for adults, juniors ages 6-12 are $14, and kids 5 & under are FREE!

Derek Thorn leads the SRL Southwest Tour standings with seven consecutive victories this year including the JM Environmental Wild West Shootout in Roseville in May. Saturday’s Nut Up 125 pays $5,000-to-win and carries a $3,000 Motor City Throwdown bonus to any driver who can defeat Thorn. Drivers aiming for their first-career win and the $8,000 payday include Bakersfield’s Buddy Shepherd who was the runner-up finisher in May and fifth place finisher Kole Raz of Lake Oswego, Oregon.

Former series champion Jacob Gomes of Manteca has finished second to Thorn twice this season and ranks second in the championship. Frazier Park’s Cale Kanke ranks fifth in the series championship with an eye on a victory as well. Other contenders include Arizona’s Brandon Farrington who finished third in the May race. Oakdale’s Blaine Rocha finished the Wild West Shootout in fourth.

Doss also leads the Spears Manufacturing Modified Series as he looks to repeat his 2020 championship. Doss has won a combined ten races in the series across the last two seasons. Travis Thirkettle of Newhall, Hesperia’s Eddie Secord, Travis McCullough of Lodi, and Andrew Anderson of Lancaster are the top-five with this weekend’s Gardner Denver 60 on tap.

The BMR Drivers Academy has been led by Granite Bay’s Cole Moore throughout the season. The series is a NASCAR Development Program utilizing ARCA chassis components and 625hp Yates engines. Other regular competitors in the series include Winnipeg, Manitoba, Canada’s Amber Balcaen and Hueytown, Alabama’s Jolynn “JoJo” Wilkinson. The Academy races for 35-laps this weekend.

Additional information on fan attendance is available at www.AllAmericanSpeedway.com Competitors will participate in practice activities on Friday before racing on Saturday. Grandstands open at 4pm followed by time trials for the SPEARS SRL Southwest Tour. Opening ceremonies will be at 5pm with all four feature evens to follow.