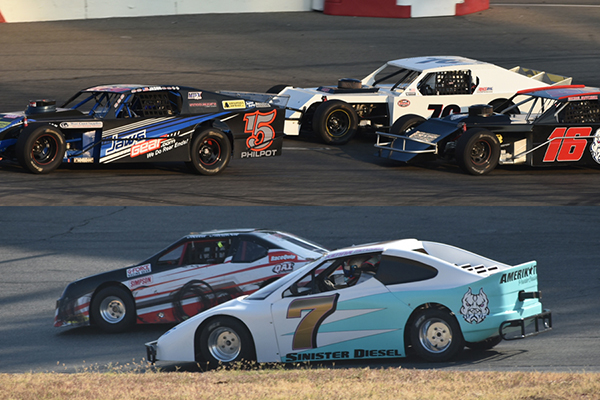 ROSEVILLE, Calif. (September 11, 2020) – All American Speedway charges into round four of its 2020 NASCAR Advance Auto Parts Weekly Series competition on September 12th with over $1,250 in cash awards for its Jaws Gear & Axle Limited Modifieds plus the return of the Mini Cup/Bandolero division. NASCAR Late Model Twin 35s, Super Stocks, F4s, and Jr. Late Models are also on the seven main event card. The 2020 season is streamed live to www.AllAmericanSpeedway.TV with the grandstands closed due to COVID-19.

The Jaws Gear & Axle Limited Modifieds will battle on September 12, September 26, and October 10 for exciting cash awards each night, courtesy of Jaws Gear and Axle with additional support from Granite Creek Realty.

In addition to the prizes, Jaws Gear is throwing in a $50 bonus awarded to any team who travels more than 100 miles to compete! Jaws Gear & Axle stickers will be available at the pit gate during check in, which must be run to be eligible for prizes.

The kids in the Mini Cup/Bandos return after a thrilling 2019 points battle that saw Kenna Mitchell top Trey Daniels by just one point in the final standings. Both compete in the 2020 Jr. Late Models, leaving the combined division for the track’s youngest racers wide-open for this upcoming event.

Granite Bay’s Cole Moore has won four main events in the NASCAR Late Model division to enjoy a 31-point advantage over Galt’s Matt Wendt in the championship standings. Wendt won round six with a lap-31 maneuver past Michael Mitchell for the win. Fort Bragg’s Kylie Daniels, Reno’s Randy Hedrick, and Roseville’s Shannon Mansch round out the top-five in the standings. Matt Erickson is the other main event winner in the division this year.

2019 Super Stock champion Andrew Peeler has taken over the lead in the track’s Div. III with a sweep of Twin 25s on August 29th. Peeler leads Roseville’s Jill Schmidt by two points ahead of Phil Wilkins, Blake Disomma, and Andrew Kemp heading into their fifth race of the year.

Roseville’s Ray Molina has won three out of four F4 main events this season for an 11-point advantage over Nevada’s Rich Innis. Jerry Nunes, Vic Theberge, and Rocklin rookie John Sproule round out the top-five. 16-year-old Aidan Daniels of Fort Bragg leads the Jr. Late Model standings by a single point over Kenna Mitchell, in the series for drivers ages 10-16 years old. Lane Anderson is only eight points out of the lead in third.

Friday practice gates open at 4pm with the track hot at 5:00 pm On Saturday, gates open at 11:30 am with practice beginning at 1 pm, followed by qualifying and opening ceremonies at 5 pm. COVID-19 social distancing rules will be in effect for this competitor only event and sound rules will be strictly enforced.