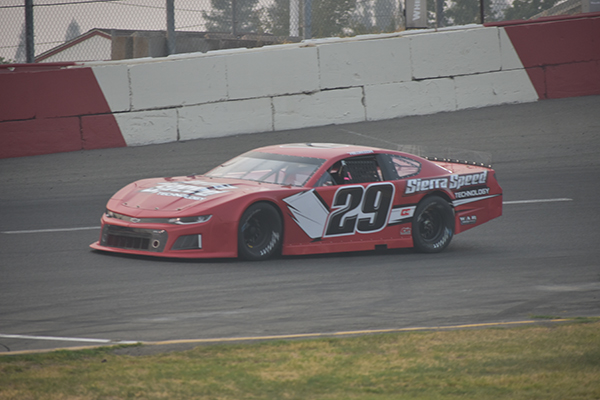 Seven total main events were staged in this competitor-only event, live streamed to www.AllAmericanSpeedway.TV An On Demand viewing pass is available now.

The first NASCAR Late Model feature got off to a tumultuous start. Angelina Demspey swept past pole sitter JJ Ferguson of Grass Valley to lead lap one. Ferguson then bounced off points leader Cole Moore of Granite Bay, spinning into turn one. Ferguson was able to continue and rejoined in front of the pack. Three-wide action ensued including the most recent winner Matt Wendt of Galt looking inside Ferguson in turn three.

Ferguson and Wendt came together on the front stretch, sending them across the track into Tyler Caturegli of Cloverdale. The hard crash into the wall ended the race for all three, with only Wendt able to return for the second 35-lap feature later in the evening.

Wendt returned minus his front-end body work and managed to lead the opening lap of the second feature. Mitchell slid into him exiting turn four to take the lead on lap two. Moore followed Mitchell into second, then Hedrick took over third on lap five. Moore and Mitchell collided for the lead on lap seven. Mitchell was ruled as protected by All American Speedway rules, persevering the lead and relegating Moore to the rear for the ensuing restart.

Hollan and Daniels crashed in turn two for the next caution, ending Daniels bid for another top-five finish. Hedrick seized the lead from Mitchell on the restart while Moore and Wendt battled for third. Wendt came to a stop to end his night on lap 16, bringing out a caution. Hedrick controlled the rest of the race, topping Moore, Mitchell, 14-year-old Kenna Mitchell, and Hollan.

Roseville’s Tyler Mullican led the first six laps before Sierra Furia went around the outside for a power move to lead lap seven. Windsor’s Sammy Nuno followed Furia on the outside to advance to second. Philpot nabbed second on lap 11, then turned his attention to Furia. Philpot took over control of the race at lap 20.

Furia engaged in an exciting duel with Josh Blackwood for the second position. The duo tangled on the backstretch on lap 33 with both cars spinning. Both were forced to restart from the back of the pack. Lincoln’s Luke Kaper fell from the top-five coming to the green flag. Philpot drove ahead for the win while the field jockeyed for second. Nuno led Furia, Mullican, and Blackwood as the top-five finishers.

An unpredictable Super Stock 30-lap feature saw 2019 champion Andrew Peeler of Sacramento emerge from the pack for his third consecutive victory. Peeler topped championship rival Jill Schmidt of Roseville by just .002 seconds in qualifying and lined up seventh after the invert.

Eric Bocksberger took advantage of the invert to lead lap one, locked in a side-by-side race with Jeremy Fritts of Roseville. Fritts never relented from the outside, edging ahead to lead lap four. Fritts then bobbled in turn one, drifting to fifth position. The top-seven cars ran closely with Dixon’s Tim Walters going around the outside of Bocksberger to lead lap nine.

Peeler advanced to second by lap 16 and looked outside Walters while Schmidt was in pursuit from third. Peeler got around Walters for the lead on lap 24, dashing away to victory. Walters won a grinding battle with Schmidt for second while Roseville’s Andrew Kemp and Bocksberger rounded out the top-five.

The 25-lap F4 feature had numerous battles for the lead but again was won by the defending champion, with Ray Molina of Roseville persevering to win. Vic Theberge of Citrus Heights used the outside to the lead the opening lap while Molina moved forward. Molina looked poised to take the lead with a three-wide maneuver in turn three, but his son Matt Fuhs snookered him for the top spot on lap nine.

Molina and Fuhs traded the lead back-and-forth before Fuhs powered ahead on lap 14. Nevada’s Rich Innis entered the battle, looking inside Molina for second on several occasions. Innis spun into the turn three wall for a caution on lap 22. Molina used the yellow to challenge Fuhs for the lead, going around the outside on lap 23 for the decisive pass. Molina, Fuhs, Dennis Crook, Theberge, and Roseville’s Matthew Cockrum were the top-five finishers.

Aidan Daniels of Fort Bragg won his third Jr. Late Model race of the season to extend his points lead, ahead of Kenna Michell of Loomis and Lane Anderson of Fort Bragg. Colton Nelson of Auburn won the Mini Cup main event ahead of Bella Thomsen of El Dorado Hills.

For more information, visit www.AllAmericanSpeedway.com The 2020 season at All American Speedway could not be possible without Sinister Diesel, Jaws Gear & Axle, JM Environmental, and Riebes Auto Parts.