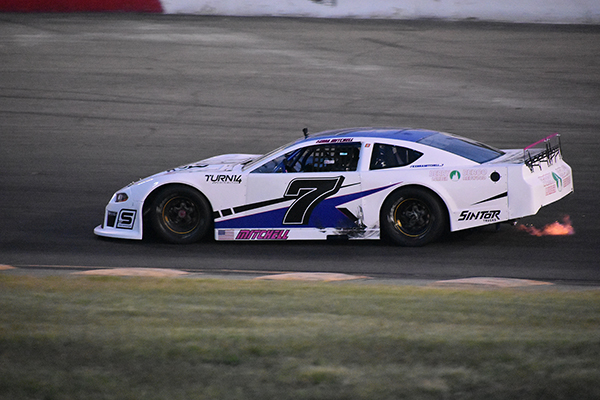 ROSEVILLE, Calif. (July 10, 2022) – The A-All Mini Storage Salute to America night at All American Speedway, powered by Roseville Toyota, delivered a pair of thrilling Late Model features for the nearly capacity crowd on Saturday night. Loomis’ Kenna Mitchell and Napa’s Dylan Zampa prevailed as two of the eight race winners during the busy evening at the one-third mile speedway. Photo by Don Thompson

The first 35-lap feature for the NASCAR Berco Redwood Late Models had on track fireworks nearly equal to the fireworks that flew above the speedway at the conclusion of the night.

2021 series runner-up Thomas Martin of Auburn spun for a caution flag on 13. Zampa used the outside to seize the lead from Romero on the restart, leading lap 16. Romero grabbed it back on lap 18 before Zampa won the battle at the point on lap 19.

Kylie Daniels and Lane Anderson each suffered spins for successive cautions. On the restart, Zampa picked the inside line and Romero went to work on the top. Zampa led lap 26 by just .002 seconds before Romero led laps 27 and 28 by a nose. Romero cleared Zampa and got a car length of separation by lap 31. Zampa fought back, driving to Romero’s bumper as the white flag flew. Coming out of turn four for the finish, Zampa collided with Romero to send him spinning. Loomis’ Kenna Mitchell avoided the melee and was awarded her first career Pro Late Model victory. Phoenix’s Bradley Erickson, Fort Bragg’s Aidan Daniels, Aguirre, and Martin were scored as the top-five finishers.

Romero suffered significant front-end damage that prevented him from starting the second 35-lap feature. Kylie Daniels of Fort Bragg drove to the front of the pack with Aguirre in tow. Aguirre and Daniels tangled in turn three, sending Daniels into a spin which damaged her front end to eliminate her from the event on lap 17. Aguirre restarted at the rear as well.

Erickson inherited a lead which Zampa quickly took away on the outside on the restart. Zampa drove off for his eighth NASCAR Late Model win of the season followed by Mitchell, Erickson, Martin, and Aidan Daniels.

The Foothills Tow Modifieds enjoyed their closest battle of the season with Brandon White of Eureka prevailing for the second time in 2022 in the 30-lap feature. Points leader Rick Andersen of North Highlands led the way from the pole position while two-by-two action ensued behind him. White engaged in a furious battle to pass Roseville’s Tyler Wentworth for second to no avail. Andersen looked in position to win before a caution for debris on the backstretch on lap 25.

Andersen won the restart over Wentworth into turn one. Andersen slid up the track on the following lap and White dove inside. A sliding, door-banging duel developed for the lead between White on the inside and Andersen on the outside. They remained fully side-by-side in lockstep over the final laps. White topped Andersen at the finish by just .034 seconds in a classic battle. Wentworth finished third followed by Sammy Nuno of Windsor and Roseville’s Tyler Mullican.

Roseville’s Josh Whitfield won his fifth Riebes Auto Parts Super Stocks feature of the season. Both Phil Wilkins of Roseville and Tim Walters of Dixon suffered spins during the main event as they drove hard for the second position. Walters’ spin on lap 22 required a restart which Wilkins used to emerge in second position. Walters finished third over Antelope’s Terry Thomas and Roseville’s Jeremy Fritts.

Fort Bragg’s Lane Anderson and his team overcame a Friday practice crash to win the 30-lap Jr. Late Model feature. Anderson took over the lead on lap six and maintained the position over restarts on lap 14 and 27 for the coveted victory. Phoenix’s Jeffrey Erickson ran closely behind Anderson for much of the race but settled for second. Roseville’s Connor West won a battle with Martinez’ Vito Cancilla for third as well. Colton Nelson of Auburn rounded out the top-five.

10-year-old Kai Lovell of Willits had a strong debut showing at All American Speedway by winning the Mini Cup/Bandolero feature. Lovell led all 15-laps. Travis Powers of Willits and Brody Manning of Lincoln battled for the second position, both also in their debut race. A collision between them in turn two set up a green-white-checkered finish. Lovell took the win while Powers charged to second. Points leader Dayton Broyles of Granite Bay, Stockton’s Lucas Burton, and Meadow Vista’s Cash Page were the top-five finishers.