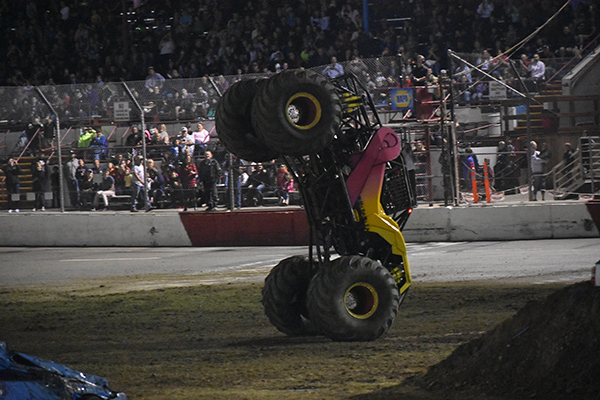 Monster Truck action included a perfect score in the evening’s freestyle competition for Rockstar, driven by the husband and wife team of Bill and Lorna Payne. Racing with a pink ribbon on their truck for breast cancer, the Paynes executed a wheel stand on the front wheels driving both forwards and backwards for several hundred feet. They then rolled the truck off a jump on the backstretch to a tremendous response from the crowd.

A large field of 14 UTVs competed in their inaugural heat races, a B Main event, and a 12-car feature event. Heat race wins went to Mike Carcierie in a blue and white Yamaha while Chris Nelle used a last lap pass to win the first heat race. Ben Morrisey of Fair Oaks led the first six laps of the main event until a red flag for Nelle rolling onto his side on the backstretch right hander. On the restart, Colfax’s Steve Rearick roared past Morrisey for the lead. Rearick steered his turbocharged Polaris to the inaugural victory ahead of Morrisey in his four seat RZR with Carcierie finishing third.

NASCAR Home Tracks dashes for $200 to win hit the track and included Jr. Kids Club trophies for lucky fans as well. Reno’s Rich Innis won the F4 dash in the afternoon while Byron Gonzales of Lincoln was the Super Stock winner. In the evening show, Mike Gorham of Lincoln won the Modified race after Tyler Wentworth and Tyler Mullican collided in turn three battling for the lead. Loomis’ Chris Scribner won a side-by-side duel with Grass Valley’s JJ Ferguson in the Late Models.

The Demolition Derby racers participated in an exciting game of soccer during the afternoon show before the bone-crushing main event in the evening. Dixon’s Richard Lavallee and Ken Cornwall ended up splitting the big money after a standoff at the finish of more than ten minutes of mayhem.

All American Speedway’s Month of Mayhem continues this Saturday with the return of the Pumpkin Smash Enduro plus a Riebes Auto Parts Trailer Bash. Activities will get underway with pumpkin smashing and trunk or treat on the front stretch at 4:30 pm. Opening ceremonies are at 6 pm with a costume contest during the halfway break. Tickets are on sale now both at the track office at 900 Riverside Blvd in Roseville or online at www.AllAmericanSpeedway.com