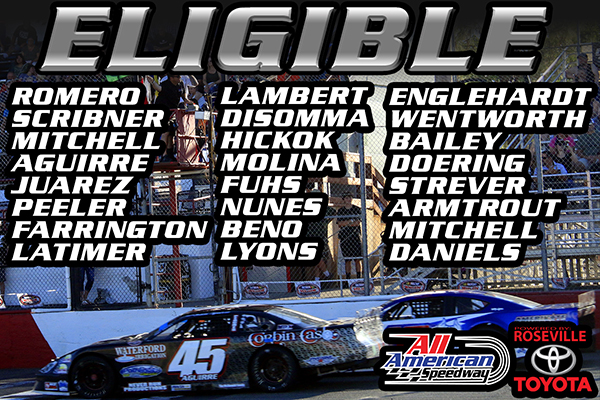 ROSEVILLE, Calif. (August 22, 2019) – All American Speedway powered by Roseville Toyota launched an innovative slate of awards and prizes for full-time competitors at the track in 2019. With three nights of NASCAR-sanctioned points racing remaining, 25 drivers are currently eligible due to their participation at the one-third mile oval.

In addition to competing for national, state, and track points and awards, Bill McAnally Racing Promotions posted approximately two dozen awards for its full-time racers. Leading the charge are 12 drivers across the NASCAR Division 1 Late Models and NASCAR Division 2 Limited Modifieds who are eligible for a prize to practice a NASCAR K&N Pro Series, West car for Bill McAnally Racing. Following the points races on August 31st and September 14th, the prize will be chosen at random from the eligible pool.

“We are thankful to have the full-time support from 25 drivers so far in our first full season at the helm of the track,” promoter Bill McAnally said. “Having a loyal and committed following of weekly racers has been the foundation for the comeback for All American Speedway.”

Additional prizes being offered include trips to Phoenix and Daytona, banquet trips to Las Vegas and Charlotte, Five Star Body and 602 Crate Engine prizes, plus sponsorship packages for their 2020 racing season. The drivers have also been competing for the Kevin Harvick Management bonus for fourth place finishes at each event in 2019 this year.

Eligible drivers from the Super Stocks include Andrew Peeler of Carmichael, Dan Farrington of Roseville, Tony Latimer of North Highlands, Loomis’ Harry Lambert, Auburn’s Blake Disomma, and Granite Bay’s Nate Hickok. F4 drivers Ray Molina, Matthew Fuhs, Jerry Nunes, and Tony Beno have also started every race this season. The Bandolero drivers of Kenna Mitchell and Fort Bragg’s Trey Daniels are both eligible for the drawing for a $1,000 sponsorship for 2020.

A complete list of prizes and awards is available at www.AllAmericanSpeedway.com

All American Speedway will return to action on August 31st with NASCAR Whelen All-American Series racing plus the Legends of the Pacific during the Whelen Engineering Night. Additional details are available by calling the track info line at (916) 786-2025. All American Speedway is located at 800 All America City Blvd in Roseville.