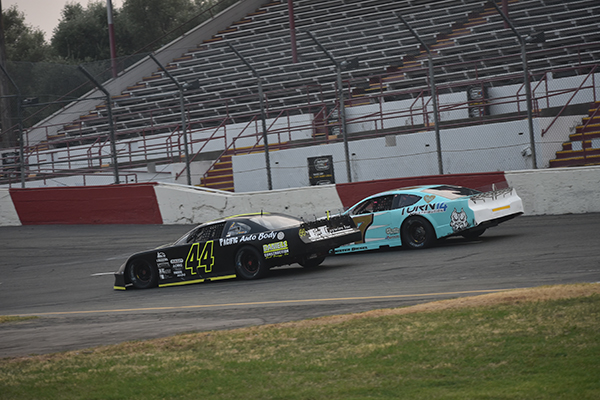 ROSEVILLE, Calif. (September 23, 2020) – The fifth night of the 2020 NASCAR Advance Auto Parts Weekly Series at All American Speedway is this Saturday night, serving as the penultimate round for the 66th season of stock car racing in Roseville, Calif. The Jaws Gear & Axle Limited Modifieds will chase after more than $1,250 in cash awards, joined by NASCAR Late Model twin mains, Super Stocks, F4s, Jr. Late Models, and Mini Cup/Bandoleros.

The seven main event card will be closed to the public due to COVID-19 guidelines, and will stream live at www.AllAmericanSpeedway.TV The SPEARS SRL Southwest Tour will make its second stop in the last five weeks to Roseville as well, with their JM Environmental-backed 127-lap event concluding the night at www.SpearsRacing.TV

Jason Philpot of Sacramento extended his Jaws Gear & Axle Limited Modified points lead when he snared the $500 to win round four on September 12. Philpot will look to add to his perfect season on Saturday night. The 30-lap feature also awards $200 for second, $100 for third, and $50 down to seventh position. Granite Creek Realty will pay $50 for the eighth, ninth, and tenth place finishers as well as a $100 Hard Charger.

Jaws Gear also offers a $50 bonus awarded to any team who travels more than 100 miles to compete.

2019 champion Andrew Peeler has won three consecutive Super Stock races to lead Roseville’s Jill Schmidt by seven points. Roseville drivers Phil Wilkins and Andrew Kemp are next in the standings, ahead of Auburn’s Blake Disomma in fifth. Tim Walters of Dixon used a runner-up finish on September 12 to move to sixth in the points.

Roseville’s Ray Molina has begun to put some distance between himself and Nevada’s Rich Innis in his bid to defend his F4 championship. Jerry Nunes, Vic Theberge, and Rocklin’s John Sproule make up the rest of the top-five in the four-cylinder division.

Perhaps the closest championship battle will be in the Jr. Late Models in 2020, where Aidan Daniels of Fort Bragg enjoys a scant four-point lead over 2019 Bandolero champion Kenna Mitchell of Loomis. Daniels has won three times while Mitchell has a single win in her rookie campaign. Lane Anderson is arguably the laps led leader of the year but is still in search of a victory with Trey Daniels rounding out the standings.

The growing Mini Cup/Bandolero division will have its third race of the year with Bella Thomsen of El Dorado Hills on top of the championship. Auburn’s Colton Nelson, who splits his time with motorcycle racing, earned his first Mini Cup win in the most recent event.

Friday practice gates open at 2pm with the track hot at 3:30 pm On Saturday, gates open at 10:00 am with practice beginning at 12:30 pm, followed by qualifying, with opening ceremonies at 5 pm. COVID-19 social distancing rules will be in effect for this competitor only event and sound rules will be strictly enforced.