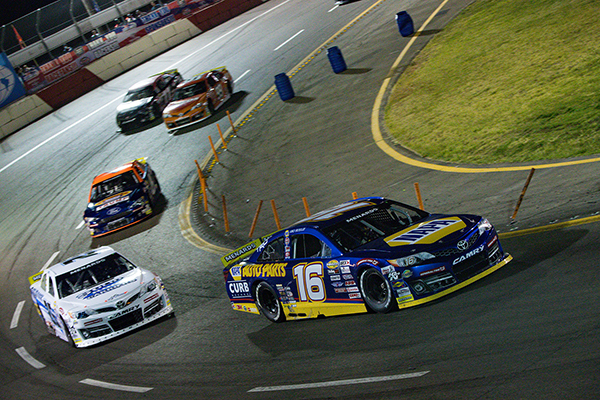 ROSEVILLE, Calif. (March 23, 2021) – The 2021 BMR Drivers Academy – a NASCAR development program – will open its season this Friday and Saturday at All American Speedway in Roseville, Calif. The program includes a 40-race campaign over 18 two-day sessions at five California ovals and road courses. Program slots remain available for all upcoming events including limited packages such as Road Course only and oval only.

Drivers will compete in full-sized stock cars utilizing a 625-horsepower NASCAR Yates Spec Engine and the same chassis components as ARCA and the NASCAR Truck Series. Races will be streamed live to a worldwide audience at www.AllAmericanSpeedway.TV or www.BillMcAnallyRacingTV.com – Part of the SPEED SPORT TV Network – with a monthly subscription available for purchase.

24-year-old Cole Moore of Granite Bay, Calif. will participate in the BMR Drivers Academy while also racing in the ARCA Menards Series West. Moore won the 2020 NASCAR Late Model championship at the one-third mile in Roseville in preparation for this year’s program.

“This Academy series is an incredible thing for me,” Moore said. “A lot of learning and I’m just excited to do some laps and learn some things.”

Manitoba, Canada’s Amber Balcaen will race the entire 2021 Drivers Academy campaign after competing in dirt Midgets. She is also the first Canadian female to win a NASCAR race when she won at Motor Motor Speedway in 2016.

“I feel very prepared and very ready to get behind the wheel for these 40 races,” Balcaen said. “Bill is someone who I’ve always wanted to race for. It gives drivers like myself the opportunity to showcase our talent.”

17-year-olds Gabe Sommers of Plover, Wisc. and Jolynn “JoJo” Wilkinson of Hueytown, Ala. will both make their first starts in this level of equipment after competing in Late Models. Sommers was the 2020 ARCA Midwest Tour runner-up and Rookie of the Year.

“Derek has been teaching me what to expect,” Sommers said. “I plan to arrive two days before each race and work in the shop, get to know (the car) under me. The cars will be a lot heavier (than the Late Model) with different tires, different brakes, and on different tracks. I’m trying to learn the best I can off videos to prepare and make a connection to the tracks.”

Wilkinson was the 2020 runner-up in the Pro Late Model championship at Sayre Speedway in Alabama.

“This is a very big learning experience for me,” Wilkinson said. “Brand new car. Nothing like I’ve ever been in before. (Sayre) is identical to this. It reminds me about Sayre. Bringing all the knowledge there to here (in Roseville).”

Drivers that win race events in the Drivers Academy during the season will receive one entry per win, towards a drawing for an opportunity with BMR/MHR in the NASCAR Camping World Truck Series at Phoenix in November. After races 14, 24, and 30, the points leader will be awarded an opportunity in a Bill McAnally Racing Toyota for a 2021 ARCA event.

Bill McAnally Racing is based in Roseville, Calif. and has won a record 10 NASCAR and ARCA regional championships and more than 100 victories. In 2020, BMR won the ARCA Menards Series West championship with 15-year-old Jesse Love, the youngest champion in series history.

Oval tracks in the 2021 BMR Drivers Academy include All American Speedway, Irwindale Speedway in Irwindale and Kern County Raceway Park in Bakersfield. Road courses will feature Sonoma Raceway in Sonoma and Thunderhill Raceway near Willows.

Primary car inventory including hood, quarter panels, color scheme, number, and font can be utilized by academy participants for their supporters and sponsors, after approval by the Academy.