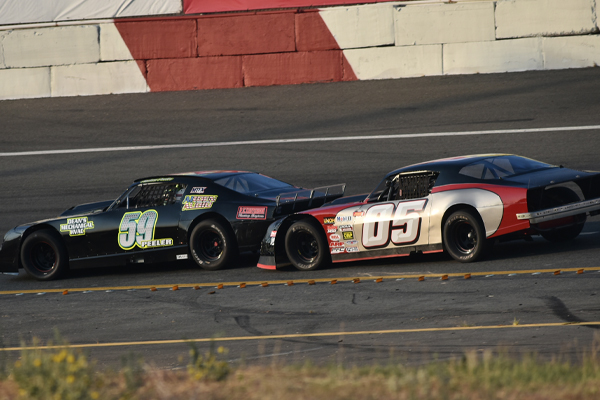 ROSEVILLE, Calif. (October 6, 2020) – Six champions will be crowned in the NASCAR Advance Auto Parts Weekly Series racing at All American Speedway in Saturday’s round six at the one-third mile in Roseville, Calif. NASCAR Late Models will be in action with twin features along with a $500 to win main event for the Jaws Gear & Axle Limited Modifieds. Super Stocks, F4s, Jr. Late Models, and Mini Cup/Bandoleros will also compete in their championship finales. Over $15,000 in NASCAR points fund awards will be decided this weekend. Photo by Don Thompson

The seven main event card will be closed to the public due to COVID-19 guidelines, and will stream live at www.AllAmericanSpeedway.TV A complete list of guidelines and information is available at www.AllAmericanSpeedway.com Race fans can purchase the October Live Pass+ which includes a 40-day on demand pass for the entire 2020 season of events plus live streaming access for both the October 10th championship finale and the October 23rd special event that features Jaws Gear & Axle Limited Modifieds, Super Stocks, and F4s competing.

Cole Moore of Granite Bay has seen the checkered flag first in six of the ten 35-lap Late Model races this year. The 2019 SPEARS SRL Southwest Tour champion finds himself 56 points ahead of Galt’s Matt Wendt in the $3,500 to win championship. Wendt has a single win this year while third in the points is Reno’s Randy Hedrick with three victories. 17-year-old Kylie Daniels ranks fourth and is also the 2019 Lakeport Speedway Legends champion. 16-year-old Aidan Daniels is fifth in the standings while also leading the Jr. Late Model championship.

Jason Philpot of Sacramento is a perfect five-for-five in the Jaws Gear & Axle Limited Modifieds and aims to close out the 2020 championship on Saturday. His advantage over Loomis’ Josh Blackwood stands at 25 points with Jon Yourd of Foresthill, Lincoln’s Luke Kaper, and Sierra Furia of Lakeport rounding out the top-five.

Andrew Peeler will look to close out a successful title defense in the Super Stock division, entering this week on a stretch of four consecutive victories. One of the largest divisions at the speedway, Super Stocks have seen 19 different competitors compete. Peeler leads Roseville drivers Jill Schmidt, Andrew Kemp, and Phil Wilkins in the standings. Tim Walters rounds out the top-five.

Like Peeler, Ray Molina of Roseville aims for his second consecutive F4 championship. His chief rival has been Nevada’s Rich Innis from the second position in the standings. The balance of the top-five include a trio of drivers looking for their first wins of the season with Jerry Nunes, Vic Theberge, and John Sproule.

Bella Thomsen of El Dorado Hills has not yet won a Mini Cup feature in 2020 but she leads that division. Auburn’s Colton Nelson has won twice this year in a great sophomore season for the motorcycle rider turned circle track racer.

Friday practice gates open at 4pm with the track hot at 5:00 pm On Saturday, gates open at 11:30 am with practice beginning at 1:00 pm, followed by qualifying, with opening ceremonies at 5 pm. COVID-19 social distancing rules will be in effect for this competitor only event and sound rules will be strictly enforced.