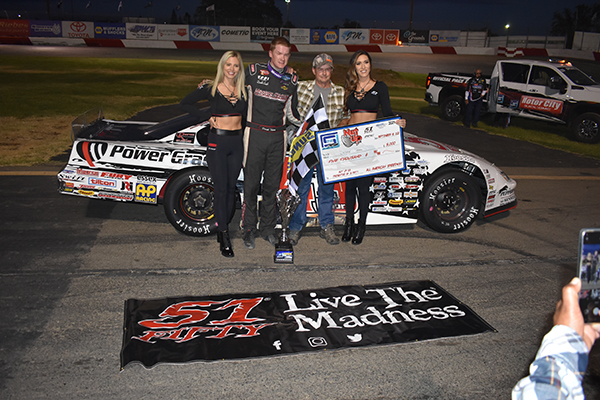 ROSEVILLE, Calif. (September 19, 2021) – The bounty on Derek Thorn will go unclaimed into yet another race weekend as the Bakersfield driver won his eighth consecutive SPEARS SRL Southwest Tour event in Saturday’s Nut Up 125 at All American Speedway powered by Roseville Toyota. Thorn was one of four winners in Roseville with Jeremy Doss, Dylan Zampa, and Gabe Sommers also scoring victories in a night full of touring stock car action. Photo by Don Thompson

Thorn qualified second and started sixth in the feature, with Carlos Vieira leading the field to green. Vieira and former champion Jacob Gomes of Manteca battled side-by-side until Gomes took the lead on the outside. Thorn then went around the outside to take second from Vieira by lap four.

Thorn did the over under maneuver, showing his nose to Gomes immediately into turn one. Thorn got the drive through turn three that he needed to lead lap ten and clear Gomes by lap 12.

Both Bakersfield’s Buddy Shepherd and Granite Bay’s John Moore passed Gomes but never could close on Thorn for the victory. A caution fell on lap 88 for Oregon’s Kole Raz slowing with a flat right front tire. Thorn picked the inside of Shepherd and maintained the top position, charging to the win followed by Shepherd, Moore, Gomes, and Arizona’s Brandon Farrington.

The lead battle picked up again with six laps to go. Zampa then slid up into Herzog exiting turn four to lead lap 57 in the decisive move for the win. Herzog settled for second ahead of Upper Lake’s Jeremy Doss, Lodi’s Travis McCullough, and 2020 All American Speedway champion Cole Moore of Granite Bay.

Jeremy Doss led all 60-laps for the Spears Manufacturing Modified Series win. A restart with six to go lined up Doss inside of Lodi’s Travis McCullough but Doss kept the top position. Hesperia’s Eddie Secord, Travis Thirkettle, and Las Vegas’ Kyle Jacks rounded out the top-five.

Up next is the ARCA Menards Series West at All American on October 9, making their 23rd appearance at the speedway in the NAPA AutoCare 150 presented by Berco Redwood. General Admission and VIP tickets are available at www.AllAmericanSpeedway.com