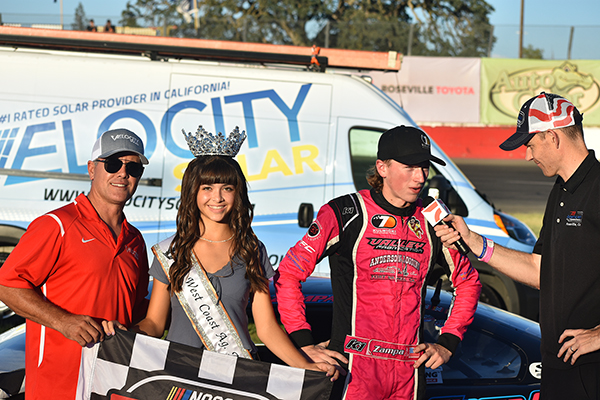 ROSEVILLE, Calif. (August 7, 2022) – Napa’s Dylan Zampa affirmed his place among the very best Pro Late Model racers in California, outfoxing Upperlake’s Jeremy Doss for victory in Saturday’s Velocity Solar Night for the NASCAR Berco Redwood Late Models in Roseville. Zampa’s sweep of the 35-lap features at the All American Speedway powered by Roseville Toyota lifts him to 11 wins and places him in a nearly insurmountable championship lead with the finale set for September 10th. Photos by Patriot Media

“Jeremy’s a great guy and I love him like a brother. Glad I got to race him like that,” Zampa said. “Some good door-to-door racing and we may have bumped a few times but it was all in love I think.”

Doss started fifth and Zampa started seventh, but the duo was quickly up to the first and second positions in the second twin feature. Meanwhile Fort Bragg’s Aidan Daniels and Loomis’ Kenna Mitchell battled for third. Mitchell cleared Daniels for third before Daniels contacted her into turn three. Mitchell spun to bring out a caution on lap 11. Daniels was penalized to restart at the rear of the field as well.

Doss chose to restart on the outside of Zampa with the duo racing side-by-side. Zampa went up the inside to lead lap 14 by a nose. Doss executed a crossover down the backstretch to drive inside for the lead on lap 16. Zampa crossed Doss over exiting turn four, then used a slight nudge into turn one to grab the lead back on lap 20 in a decisive maneuver.

Mitchell drove past Auburn’s Thomas Martin for third on lap 22 but was unable to claw towards the leaders. Zampa stretched his lead out to a .773 second advantage at the checkered flag over Doss, Mitchell, Martin, and Daniels.

In the first 35-lap contest, Daniels was the early pace setter. A caution flew on lap three when Roseville’s Conor West spun in the third corner. West’s teammate Martin drove around the outside of Daniels to lead lap six. Zampa then went to the outside to take second on lap eight. Zampa drove inside Martin on the backstretch to lead lap 14. Zampa scored victory while Martin fended off Doss for the second position. Mitchell finished fourth ahead of Daniels.

Zampa Motorsports also assisted with a 50-50 raffle for the Placer Breast Cancer Foundation. The winner won $1,010, then donated $200 back to the cause. A total of $1,210 will be donated to the PBCF after a great fundraiser.

North Highlands’ Rick Andersen won his third NASCAR Foothills Tow Modified feature to continue the narrow championship battle with Eureka’s Brandon White. Andersen led all 30-laps but not without challenges. Roseville’s Tyler Wentworth tracked down Andersen on several occasions but was never able to complete the pass. White advanced to third but would stay there until the finish. Colfax’s Cody Bailey and Roseville’s Tyler Mullican rounded out the top-five.

Josh Whitfield of Roseville won his seventh Riebes Auto Parts Super Stocks race of the season in a dominating performance in the 30-lap event. Roseville’s Phil Wilkins, Terry Thomas of Antelope, Harry Lambert of Loomis, and Woodland’s Jerry Miller were the top-five finishers.

The F4 division enjoyed its sixth different winner in seven rounds with another first-timer in Velocity Solar Victory Lane when Mario Novelli of Citrus Heights claimed the win. Novelli seized the lead from pole sitter Jeremy Pruitt, who eventually fell to sixth. The six-car lead pack ran closely throughout the race. Points leader Ray Molina of Roseville and Vic Theberge of Citrus Heights swapped the second position back-and-forth on lap 12, then Molina was passed by Rocklin’s John Sproule and Roseville’s Matthew Fuhs in the final laps. Novelli, Theberge, Sproule, Fuhs, and Molina were the top-five at the checkered flag.

Incoming fifth grader Vito Cancilla of Martinez won his second full-size stock car race by taking another Jr. Late Model victory. Cancilla led all 30 laps of the main event. A caution flag came out on lap 25 for Bella Thomsen spinning in turn two. Cancilla was undeterred as he drove ahead of Auburn’s Cotlon Nelson, Brody Petrie of Upperlake, and Thomsen at the finish.

Stockton’s Lucas Burton, an incoming sixth grader, produced a spin and win performance in the 15-lap Mini Cup/Bando feature. Burton and Meadow Vista’s Cash Page spun for the second position. On the restart, Burton challenged points leader Dayton Broyles of Roseville for the lead. Burton grabbed the position on lap nine and drove to victory lane. Broyles and Page rounded out the finishers.

Mike Metts won both the $1,000-to-win Riebes Auto Parts Trailer Bash finale and the $250 Master of Disaster prize during the final Bash of the 2022 season. Early race leaders Chris Garrow of Citrus Heights and Dillon Petersen of Yuba City both encountered issues in the metal grinding 15-lap event. Rocklin’s John Sproule steered the Batman car to second place ahead of Matthew Townsley in third. Garrow finished fourth followed by Mick Clarke in fifth.

All American Speedway will host its championship finales for the NASCAR Berco Redwood Late Models and Jr. Late Models during its next race on September 10th! Foothills Tow Modifieds, Riebes Auto Parts Super Stocks, F4s, and Mini Cup/Bando will also be in action.