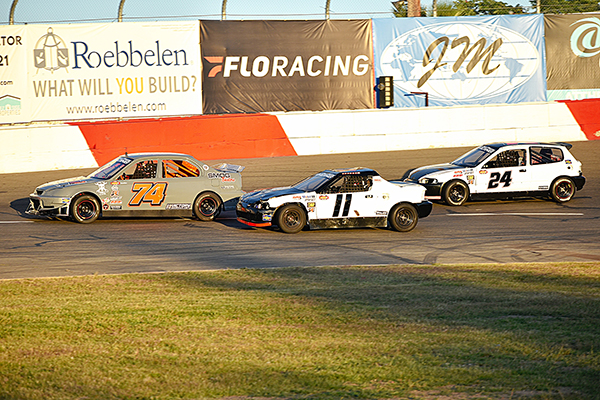 ROSEVILLE, Calif. (May 31, 2022) – All American Speedway powered by Roseville Toyota will celebrate the 5th year of promotion by Bill McAnally Racing and the 68th year of motorsports competition in Roseville with the Edge of Summer this Saturday night. Throw it back to the 80s and summers spent at the speedway with seven main events of NASCAR Advance Parts Weekly Series action plus the third Riebes Auto Parts Trailer Bash of the year. Photo by Don Thompson

Race fans and race teams will be encouraged to dress in their favorite old time racing gear, with the best-dressed fans being selected for special experiences! The speedway social media accounts will select winners for free four-packs of tickets if a fan shares their favorite track memory or photo as well.

Grandstands open at 5pm followed by heat races at 5:15pm. Opening ceremonies are at 6pm with main events to follow. The Riebes Auto Parts Trailer Bash closes the show! Tickets for Edge of Summer are available online at www.AllAmericanSpeedway.com All seats are general admission, priced at $20 for adults, juniors ages 6-12 are $15, and kids 5 & under are FREE!

Bill McAnally Racing took over promotion of the one-third mile on June 15, 2018 with unique events, a growing Pro Late Model contingent, a return focus to youth of the sport, and packed grandstands. That tradition has continued in 2022.

Napa’s Dylan Zampa has rocketed up the charts in the NASCAR national standings with his perfect five-for-five start to the Berco Redwood Late Model season. Zampa ranks 36th nationally out of hundreds of drivers who have competed across North America. His five wins also give him a 23-point advantage over 2021 champion John Moore of Granite Bay in the title fight. Loomis’ Michael Mitchell, 2021 runner-up Thomas Martin of Auburn, and Loomis’ Kenna Mitchell round out the top-five. The Berco Redwood Late Models compete in twin 35-lap features this weekend!

The Riebes Auto Parts Trailer Bash has exploded with new participants this year, with a field of nine competitors on April 9 and ten competitors on May 14. Dillon Petersen came from the back to win the $1,000 prize in round one while Quinter Pittillo of North Highlands led all 15-laps to grab the second race. A $250 Master of Disaster prize is also offered along with $250 for the best-looking trailer as voted by the fans! Drivers must cross the finish line first and survive with their trailer attached to be the winner of the race. No car-on-car contact is allowed, but drivers are encouraged to slam into each other’s trailers in a battle for supremacy.

Roseville’s Josh Whitfield is undefeated through the first three races of the Riebes Auto Parts Super Stocks season with a successful opening to his title defense. Roseville’s Phil Wilkins is solidly second in the standings with a 23-point advantage over Antelope’s Terry Thomas. Galt’s Larry Thornhill and the entry spearheaded by Rancho Cordova’s Gary Eisenhour make up the rest of the top-five.

24 different drivers have taken an F4 green flag this year with Roseville’s Ray Molina surging into the points lead. The multi-time champion earned his first win of the year on May 14 to take a five-point lead over teammate John Sproule of Rocklin. Roseville’s Nathan Cleaver, Citrus Heights’ Vic Theberge, and Sun Valley, Nevada’s Rich Innis are the top-five in the standings heading into the fourth 25-lap feature of the year.

Fort Bragg’s Trey Daniels, the 2019 Bandolero runner-up, has moved into the points lead in the Junior Late Model division. Roseville’s Connor West is just eight points behind in second. Former Mini Cup champions Bella Thomsen of El Dorado Hills and Colton Nelson of Auburn are third and fourth. Chase Hand, son of 24 Hours of Lemans winner Joey Hand, won his first career stock car start on May 14 and is fifth in the standings. A 30-lap race is scheduled for the drivers ages 10-16 years old.

The youngest drivers at the speedway race in the Mini Cup division where the series has not yet had a repeat winner. Roseville’s Dayton Broyles became the newest winner with his first triumph of his career coming in round three. He leads the standings over Stockton’s Lucas Burton and Leilani Sprenkel.

Additional information on fan attendance is available at www.AllAmericanSpeedway.com  Competitors will participate in practice activities on Friday before racing on Saturday. Grandstands open at 5pm followed by heat races at 5:15pm. Opening ceremonies are at 6pm with main events to follow. The Riebes Auto Parts Trailer Bash closes the show!