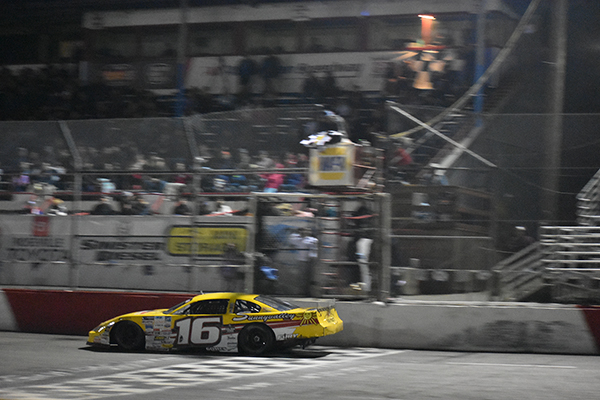 Gomes sprinted to a 12.988 second lap in time trials for a new track record in the series. He led the 15 starters to green and never relinquished the top position. The first 38 circuits ran caution free with Gomes leading while Bakersfield’s Buddy Shepherd, Upperlake’s Jeremy Doss, Las Vegas’ Dustin Ash, and Agoura Hills’ Trevor Huddleston jockeyed in a tight formation for second.

The caution fell for Colorado’s Jace Hansen spinning in turn two. Shepherd pitted under yellow and lost three laps in the process. Dan Holtz spun on the restart, requiring a subsequent yellow. The caution fell again on lap 42 when Ash and Doss banged doors into turn one sending Ash for a spin.

Green flag racing followed with a two-by-two battle for fourth while Gomes, Doss, and Huddleston broke away from the pack. 2007 All American Speedway and 2006 SRL champion Eric Schmidt of Roseville faced pressure from a resurgent Hansen. Gomes found himself mired in lapped traffic, allowing Doss to close within a car length of the lead by lap 79. A competition yellow flew on lap 89 after 40 consecutive green flag laps were completed.

Gomes maintained the lead on the restart while Huddleston clamped down on Doss. Both cars had brake rotors glowing and smoke coming off their tires in the long battle. Hansen eventually closed in, snookering Huddleston for third. Gomes claimed the five-figure payday over Doss, Hansen, Huddleston, and Schmidt.

The $5,000-to-win feature for the SPEARS Pro Late Models and NASCAR Berco Redwood Late Models attracted 20 entries from across the west but a familiar winner. Napa’s Dylan Zampa won his seventh Roseville race in the last 12 months with a flag-to-flag lead over the field. The race began with Orangevale’s Calvin Hegje pounding the turn one wall. A series of spins brought out three additional cautions, including two spins for newcomer Ryan Martin. Multiple cars fell out of the event in minor incidents that did not require caution flags.

Arizona’s William Guevara and Utah’s Jeff Longman tangled in turn four for the first caution on lap seven. Idaho’s Shelby Stroebel and Saugus’ Travis Thirkettle began their battle on the restart, in a duel that would last a majority of the race. Elliott drifted back to sixth after the restart. Kyle Jacks of Las Vegas, Stroebel, Thirkettle, and McCullough battled for the second position by the 41st lap. After a competition caution, Thirkettle went outside of Stroebel to clear him for third.

Thirkettle was unable to overhaul Jacks or reel in White over the final stages of the feature. White took a decisive 2.305 second advantage across the checkered flag for $2,000 over Jacks, Thirkettle, Stroebel, and McCullough.

NASCAR Advance Auto Parts Weekly Series competitors kicked off their seasons as well on Saturday night. 2021 Riebes Auto Parts Super Stock champion Josh Whitfield of Roseville added to his nine victories from last year by winning the 30-lap opener and taking a trip to Velocity Solar Victory Lane. The exclamation point came on lap 20 when former champion Andrew Peeler and Phil Wilkins mixed it up. The ensuing melee sent Peeler for a spin in turn two where he collected Rancho Cordova’s Gary Eisenhour.

Whitfield drove ahead of Lodi’s Brandon Jones for the win while Peeler came back to finish third. Terry Thomas, Jr. and Wilkins rounded out the top-five.

The largest field of F4 competitors since November 2019 were in action, with 19 cars in the pits and 17 entries accepting the green flag. Citrus Heights’ Dan Cherry crashed hard into the turn four wall to bring out a red flag on lap two. He was uninjured. Rocklin’s John Sproule led the field into lapped traffic by lap eight. Lincoln’s Brandon Frantz drove alongside Sproule and took the lead on lap ten.

Stephen Bazen of Santa Clarita led all 20-laps for the Mini Cup/Bando triumph. The 11-year-old topped Roseville’s Dayton Broyles and Leilani Sprenkel at the finish.