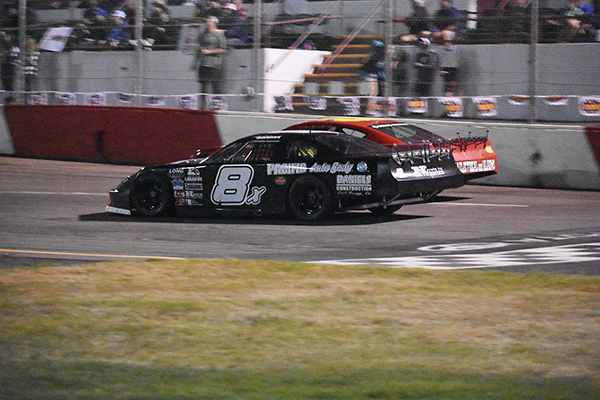 Advanced tickets are available online at www.AllAmericanSpeedway.com with state, local, and CDC guidelines enforced at the event. Servicemen and women will be recognized during opening ceremonies and VIP experiences will be raffled off to raise money for non-profits.

Masks are required for attendees and all attendees including children must have a ticket selected in advance online. Tickets will be priced at $20.00 except children five and under who are free. Parking is controlled by @the Grounds and race fans must park at the main entrance lot off Junction Blvd. Grandstands open at 5pm with heat racing action at 5:15pm Opening ceremonies are at 6pm with features to follow.

Berco Redwood, Jaws Gear & Axle, and Riebes Auto Parts are providing cash bonuses in their respective divisions throughout the 2021 season, with drivers required to run sponsor stickers to be eligible. Berco offers $500 in cash awards per each twin main event for the Late Models while Jaws Gear & Axle has offered $250 in product awards. Riebes presents $175 in cash bonuses for each Super Stock feature.

The NASCAR Berco Redwood Late Models will have their lowest points score dropped at the end of the year, but Granite Bay’s John Moore is the current high point driver with a six-point advantage in the championship. Moore has two wins in the first three events of the year.

Auburn’s Thomas Martin has used a trio of top-five finishes to rank second. The other main event winner in 2021 is Fort Bragg’s Aidan Daniels, the 2020 Jr. Late Model champion. Galt’s Matt Wendt and Roseville’s Lance Halm round out the top-five in the standings. Drivers such as Shannon Mansch and Rick Scribner are among those using last weekend’s race as their drop race and will look to climb back up the standings on Saturday. A pair of 35-lap features are scheduled, including an eight-car inversion of the first race’s finish to set the nightcap’s starting lineup.

Eric Price leads the Jaws Gear & Axle Modified standings with three wins, ahead of Colfax’s Ralph Bailey. 2020 champion Jason Philpot is still aiming for his first 2021 win from the third position ahead of Loomis’ Josh Blackwood and Jon Yourd. The Modifieds compete for 30-laps on Saturday as do the Riebes Auto Parts Super Stocks.

The NASCAR Division III class at the speedway is led by 2020 champion Andrew Peeler with a lone win this year. Roseville’s Roy Smith is just five points out of the lead ahead of three-time 2021 winner Josh Whitfield. Tim Walters of Dixon and Roseville’s Jeremy Fritts are tired for fourth in the order.

A growing contingent of the youth racers in Roseville are expected on Saturday night in both the Jr. Late Models and Mini Cup/Bando divisions. Through the first three Mini Cup/Bando races, all three victories have gone to Mini Cup cars including two wins for points leader Colton Nelson of Auburn. Kenna Mitchell of Loomis won the Jr. Late Model opener in March and looks for another win in round two on Saturday.

Cole Moore of Granite Bay is undefeated in the BMR Drivers Academy through six attempts and looks to hold off Winnipeg, Manitoba, Canada’s Amber Balcaen and Plover, Wisc.’s Gabe Sommers this weekend. The Academy will compete on Friday for pay-per-view coverage and again on Saturday during the race event, utilizing 625hp engines with ARCA chassis components.

Additional information on fan attendance is available at www.AllAmericanSpeedway.com Competitors will participate in practice activities on Friday before racing on Saturday. Pit gates open at 11am with practices beginning at 1:15pm. Qualifying takes place at 3:15pm before grandstands open at 5pm. Heat races will be at 5:15pm with opening ceremonies at 6pm. Competitors will be limited to the competitor seating areas in turn two for distancing and safety from the general public in the grandstands. Fans who are unable to secure one of the limited tickets can also purchase a Pay Per View subscription at www.AllAmericanSpeedway.TV

All American Speedway wants to thank @the Grounds for their support along with partners such as Roseville Toyota, Berco Redwood, Riebes Auto Parts, Jaws Gear & Axle, JM Environmental, Sinister Diesel, and A-All Mini Storage for making this season possible. Companies interested in supporting these events can contact All American Speedway at (916) 786-2025. Without competitor support and local community partners, these events would not take place.