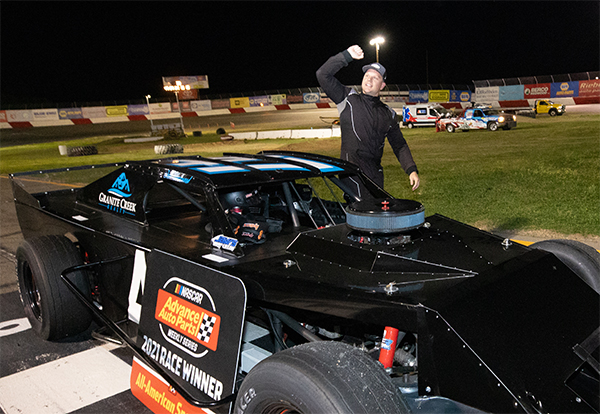 Price’s win lined him up eighth for the second 30-lap main after the inversion. Don Shalla and Tyler Mullican had a physical battle for the lead before Mullican drove ahead on lap two. Loomis’ Blackwood quickly entered the picture, knifing under Mullican in turn three to lead lap five.

2020 champion Jason Philpot of Sacramento and Rio Linda’s Price marched through the field throughout the contest. Windsor’s Sammy Nuno and Tyler Wentworth of Rocklin tangled for a caution on lap 14.

Blackwood picked the inside on the restart and maintained the top spot. Philpot and Price ran side-by-side for several laps for third before Price grabbed the position. Price then narrowly topped Ralph Bailey of Colfax at the finish for second place, behind Blackwood’s victory.

“This is so sweet and it’s been a long time coming,” Blackwood said to the fans in victory lane.

The first 30-lap feature for the Jaws Gear & Axle Modifieds opened with Bailey and Mullican battling in a father-and-son duel for the lead before a caution for debris. Bailey took over on the restart before a multi-car crash in turn one slowed the action. Blackwood tagged the back of Rick Andersen of North Highlands, sending him spinning. Nuno and Wentworth collided with both suffering significant damage but continuing on.

Price took advantage of the skirmish to take the lead on the restart, leading Bailey, Philpot, Andersen, and Blackwood as the top-five finishers. Price and Nuno were the heat race winners.

Both the F4s and Super Stocks had exciting finishes that ultimately were changed in post-race inspection.

Roseville’s Josh Whitfield navigated his way to the front throughout the 30-lap Super Stock feature. Roseville’s Andrew Kemp led the first 12 laps of the race before Roseville’s Roy Smith grabbed the lead exiting turn four to lead lap 13. Whitfield worked his way towards Smith in open race track, moving inside of him on lap 20 before completing the pass on lap 21.

Kemp spun in turn four for a caution that led to a lengthy red flag for fluid on the speedway. Whitfield held off 2020 champion Andrew Peeler in a five-lap shootout to the finish, before post-race inspection penalized Whitfield to the end of the lead lap for violations. Peeler was awarded the win ahead of Smith, former track champions Blake Disomma and Chris Paulson, and a solid fifth for Jeremy Fritts of Roseville. Smith and Peeler were the heat race winners as well.

Citrus Heights’ Vic Theberge led all 25-laps for the F4 feature win before a post-race infraction gave Nevada’s Stephen Crook his second consecutive win. Theberge faced pressure from Crook and Roseville’s Nathan Cleaver for the duration of the event as the trio darted in-and-out of lapped traffic.

Matthew Fuhs went underneath the 16.5 second breakout rule twice, requiring a pair of stop-and-go penalties that kept him from contending. Crook, 2020 champion Ray Molina, Matthew Cockrum, Brandon Frantz, and Fuhs were the top-five on the adjusted results. Fuhs and Cleaver were the heat race winners.

The youngest drivers at All American Speedway compete in the combined Mini Cup/Bando division where Auburn’s Colton Nelson won by a nose after a late challenge from 2020 champion Bella Thomsen. Nine-year-old rookies Anthony Bean and Joseph Elf rounded out the field.

Cole Moore continued his strong runs in the BMR Drivers Academy – a NASCAR Driver Development program – by taking his fourth checkered flag of the season. The 2020 All American Speedway NASCAR Late Model champion led Canadian Amber Balcaen across the stripe.

UTVs returned to the All American Speedway with an off road course for the heat race and a competition on the paved oval serving as the feature. Sacramento’s Cody Vanderveer won an exciting heat race over Steven Rearick of Auburn with Anthony Fifer in third. Fifer came back to top Vanderveer and Rearick on the paved oval under the lights.

All American Speedway continues May 1 with a full slate of NASCAR Advance Auto Parts Weekly Series racing plus the first Trailer Bash of the season. Tickets will be available soon at http://www.AllAmericanSpeedway.com

Every round of the 2021 season can be followed live or on-demand at www.AllAmericanSpeedway.TV

All American Speedway wants to thank @the Grounds for their support along with partners such as Roseville Toyota, Jaws Gear & Axle, JM Environmental, and Sinister Diesel for making this season possible. Companies interested in supporting these events can contact All American Speedway at (916) 786-2025. Without competitor support and local community partners, these events would not take place.