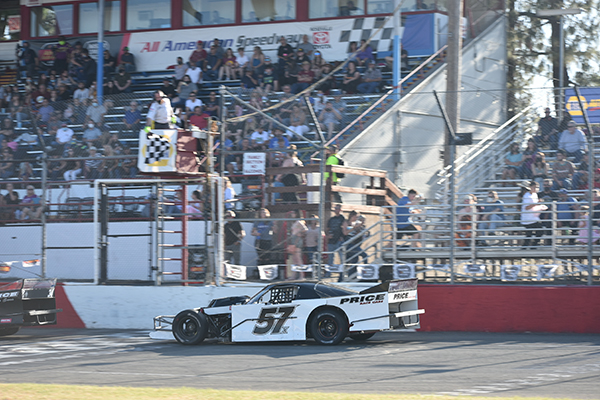 ROSEVILLE, Calif. (May 2, 2021) – Eric Price won a thrilling side-by-side battle with 2020 Jaws Gear & Axle Modified champion Jason Philpot on Saturday night at All American Speedway in Roseville, scoring Price his third win of the year to extend his points lead. Price was one of eight winners during the evening of NASCAR weekly series racing, capped by the Riebes Auto Parts Trailer Bash held before a great crowd. Photo by Don Thompson

Price started the 30-lap feature in fifth after an eight-car inversion from the heat race finishes. The invert placed Roseville’s Tyler Mullican on the pole. A caution flew on lap two when race three winner Josh Blackwood spun on the backstretch. Philpot passed Mullican on the outside on the restart to claim the lead on lap four.

Rick Andersen and Ralph Bailey slid off turn four in a close battle, sending Andersen into the front stretch wall. Andersen then clipped a passing Blackwood, lifting Blackwood’s Modified off the ground briefly. The grinding fracas ended the race for both Andersen and Blackwood.

Philpot and Price began their torrid race for the win on the following restart. Price led laps 11 and 12 before Philpot led lap 13. Price was credited with lap 14 before Philpot led lap 15. Price looked for a crossover for the lead but was nullified by a caution. The side-by-side racing continued on the restart with Price using the outside to lead laps 18 and 19. Philpot got sideways exiting four, allowing Price to pull ahead for the win. Price led Philpot, Mullican, Bailey, and Luke Kaper as the top-five finishers.

Granite Bay’s Cole Moore won by a nose in the Berco Redwood Late Model 40-lap feature, with drivers jockeying for local, state, regional, and national points in their third points race of the year. Moore’s win came over his father John, who inherited credit for the victory after Cole Moore was disqualified in post-race for failing to report to tech.

Calvin Hegje led the first three laps before Matt Wendt of Galt took over. Cole Moore followed Wendt into second, then took the lead on lap 13 from the inside. Loomis’ Michael Mitchell and Fort Bragg’s Aidan Daniels tangled for a caution on lap 17. The caution fell again on lap 23 for JJ Ferguson spinning.

Thomas Martin and Wendt battled for second before Ferguson spun again with ten to go. John Moore was shot out of a cannon, working past Martin and Wendt quickly. He then set his sights on son Cole but came up short by a nose at the line. The official top-five will be John Moore, Martin, Wendt, Mitchell and Lance Halm.

Josh Whitfield of Roseville swept the Riebes Auto Parts Super Stock Twin 25s. In the first contest. Phil Wilkins was the early pace setter. Whitfield advanced to the inside to take the lead by lap six. Roseville’s Roy Smith won his heat race and moved into second by lap seven. Smith was unable to make ground on Whitfield as the top-five were Whitfield, Smith, Wilkins, 2020 champion Andrew Peeler, and Dixon’s Tim Walters.

The Super Stock drivers turned up the intensity in the second feature, Roseville’s Andrew Kemp started up front after the eight car invert. Whitfield immediately advanced four positions in the first four circuits of the race.

Walters clamped down on Kemp before contact in turn one on lap ten sent Kemp spinning. Kemp was protected as the leader while Walters was relegated to the rear. Whitfield grabbed the lead on the ensuing restart with Peeler eventually finding his way to second. Whitfield topped Peeler, Smith, Wilkins, and Roseville’s Jeremy Fritts for the win.

The F4 division staged perhaps their most intense race in recent years, with as many as eight drivers factoring in the lead pack throughout the 25-lap affair. 2020 champion Ray Molina of Roseville led the way but surrendered the lead on lap six to Dennis Crook of Nevada. Molina tried to get around Crook on the outside on several occasions. Nathan Cleaver of Roseville tagged Citrus Heights’ Vic Theberge for a caution in turn one on lap 14.

Stephen Crook and Fuhs collided for a caution on the 24th lap of the race, followed by Crook and Fuhs hitting hard under caution. Both were unable to continue. A green and white flag together placed Molina outside Dennis Crook. Molina charged to the outside and took the scant .043 second win in a near photo finish followed by Crook, Matthew Cockrum, Cleaver, and Brandon Frantz.

Colton Nelson extended his points lead in the Mini Cup/Bando division, leading the final 19-laps for the victory. Rookie Anthony Bean of Lincoln finished second after a race-long battle with 2020 champion Bella Thomsen.

All American Speedway returns to action on May 15th with the Armed Forces Night for NASCAR Advance Auto Parts Series racing. Tickets will be on sale at noon on May 3rd at www.AllAmericanSpeedway.com Seating is limited by state COVID19 guidelines.

Every round of the 2021 season can be followed live or on-demand at www.AllAmericanSpeedway.TV

All American Speedway wants to thank @the Grounds for their support along with partners such as Roseville Toyota, Berco Redwood, Riebes Auto Parts, Jaws Gear & Axle, JM Environmental, Sinister Diesel, and A-All Mini Storage for making this season possible. Companies interested in supporting these events can contact All American Speedway at (916) 786-2025. Without competitor support and local community partners, these events would not take place.