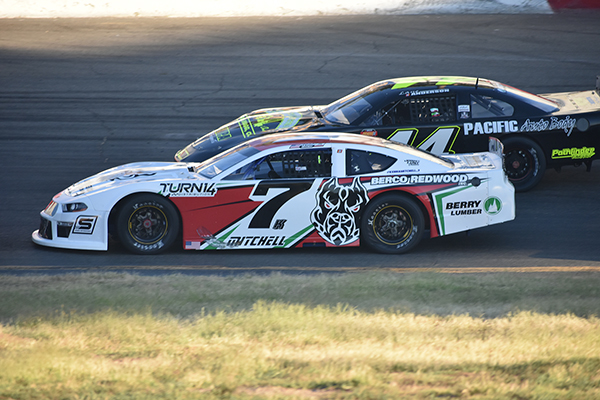 ROSEVILLE, Calif. (August 2, 2022) – Velocity Solar Night at the Races hits All American Speedway powered by Roseville Toyota on Saturday August 6 with the final Riebes Auto Parts Trailer Bash of the season and the night’s action benefitting the Placer Breast Cancer Foundation. All six NASCAR Advance Auto Parts Weekly Series divisions will also be competing on the one-third mile @the Grounds in Roseville, including the penultimate round for the NASCAR Berco Redwood Late Models. Photos by Don Thompson

Grandstands open at 5pm followed by heat races at 5:15pm. Opening ceremonies are at approximately 6pm with main events to follow. Tickets for Velocity Solar Night are available online at www.AllAmericanSpeedway.com All seats are general admission, priced at $20 for adults, juniors ages 6-12 are $15, and kids 5 & under are FREE!

NASCAR Berco Redwood Late Model points leader Dylan Zampa of Napa looks to inch closer to the season championship while also racing for a great cause. Zampa’s No. 92 Late Model carries a pink paint scheme as his family has been touched by breast cancer. The Kulwicki Driver Development Program member will help with a 50-50 raffle during Saturday’s races, with the proceeds benefitting the Placer Breast Cancer Foundation. All American Speedway and promoter Bill McAnally Racing have fundraised for PBCF for many years, helping them achieve their goals of a $1.5 million endowment for cancer research at UC Davis.

The Riebes Auto Parts Trailer Bash has thrilled race fans all season with Saturday’s finale giving drivers one more shot at a hard-hitting $1,000 prize. The winner at the end of 15-laps of competition must still have their trailer attached, with drivers aiming to bash it off in search of a $250 Master of Disaster prize as well. $250 is also offered for the best decorated team as chosen by the fans.

Two wins in July has boosted Loomis’ Kenna Mitchell to second in the Berco Late Model championship, trailing Zampa by 51-points. Twin 35-lap races will be held on both August 6 and September 10 to determine a champion. Both drivers are also challenging for the NASCAR California State title as well. Fort Bragg’s Aidan Daniels, Auburn’s Thomas Martin, and Loomis’ Michael Mitchell make up the top-five in the series.

Brandon White of Eureka leads the most hotly contested battle in Roseville in the Foothills Tow Modified division. White’s two wins in July had a combined margin of victory of .102 seconds. He leads North Highlands’ Rick Andersen by nine points entering this weekend’s 30-lap race. Roseville’s Tyler Wentworth, Sammy Nuno of Windsor, and Lincoln’s Cody Rickard round out the top-five.

Roseville’s Josh Whitfield is well on his way to a perfect season in his Riebes Auto Parts Super Stock title defense as he is six-for-six in trips to Velocity Solar Victory Lane. Roseville’s Phil Wilkins is second followed by Antelope’s Terry Thomas, Jr., Larry Thornhill of Galt, and Roseville’s Jeremy Fritts.

John Sproule of Rocklin is the latest winner in F4 competition with a triumph in a 40-lap race on July 23. Sproule looks to close a 31-point deficit to Roseville’s Ray Molina in the standings on Saturday. Citrus Heights’ Vic Theberge ranks third followed by Sun Valley, NV’s Rich Innis, and Roseville’s Nathan Cleaver with a 25-lap feature on tap.

Fort Bragg’s Trey Daniels has accumulated a 24-point cushion in the Jr. Late Model division for drivers ages 10-16 years old. The series races in 30-lap races which challenge the young drivers during the warm summer months at high speeds. Auburn’s Colton Nelson leads Bella Thomsen of El Dorado Hills by eight points in the race for second overall. Martinez’ Vito Cancilla is only 19-points out of second despite the 10-year-old missing the season opener. Fort Bragg’s Lane Anderson has scored two wins this year to move to fifth in the standings.

Dayton Broyles of Roseville has a solid 51-point lead in the Mini Cup/Bando division over most-recent winner Lucas Burton of Stockton. Cash Page of Meadow Vista led his first laps of his career on July 23 and is third in the points.

Additional information on fan attendance is available at www.AllAmericanSpeedway.com  Competitors will participate in practice activities on Friday before racing on Saturday. Grandstands open at 5pm followed by heat races at 5:15pm. Opening ceremonies are at 6pm with main events to follow.