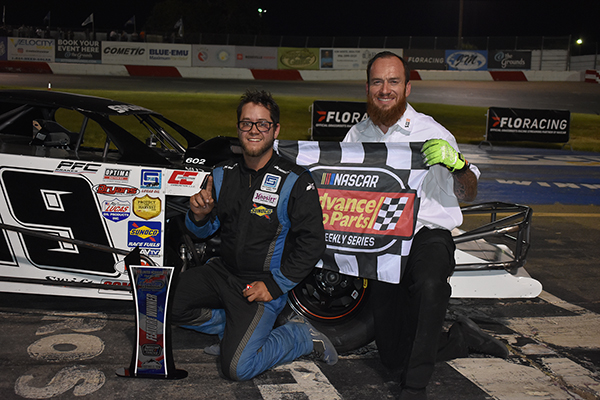 White’s victory in Saturday’s 30-lap Modified feature was by just .068 seconds, joining a win by .034 seconds on July 9 for just over one tenth total for the margin of victory for his back-to-back triumphs.

Foresthill’s Jon Yourd led the Modifieds to green before the race was slowed by Sammy Nuno stalled on the off ramp. Loomis’ Josh Blackwood seized the lead on the restart and Yourd drifted back to seventh. White drove to the inside of Rick Andersen of Citrus Heights but the pair collided, sending Andersen for a spin and a caution on lap 14. Andersen was relegated to restarting at the back of the field.

White then drove around the outside of Blackwood to lead lap 15. Cody Bailey of Colfax spun in a chain reaction incident in turn four for the next caution. White restarted inside Blackwood and fended off a brief challenge. Roseville’s Tyler Wentworth took over second from Blackwood on lap 22. A caution for Yourd spinning on lap 26 set up the thrilling conclusion.

Wentworth edged forward on the outside of White to lead lap 27, before White cleared him on lap 28. Wentworth executed a cross over on the backstretch to storm inside White in turn three. White held the lead at the line on lap 29, now running on the outside. White won the side-by-side challenge for the narrow win. Blackwood, Andersen, and tenth starting Cody Rickard of Lincoln were the top-five finishers.

Mitchell and Zampa worked past Eric Price, Jr. on lap 25 to take second and third respectively. Kris Price then slowed from the lead requiring a caution flag and handing the lead to Mitchell. Mitchell drove ahead on the restart while Zampa and Eric Price crashed for second which ended Zampa’s bid for the win. Mitchell led over the final restart to top Aidan Daniels of Fort Bragg, Lane Anderson, Eric Price, and Kylie Daniels.

Zampa answered back by winning his ninth feature of the year in the second 35-lap feature. He took the lead from Kylie Daniels on lap three and never surrendered it. Daniels finished second ahead of Anderson, Mitchell, and Aidan Daniels.

Rocklin’s John Sproule won his first-career F4 feature in an extra-distance 40-lap affair. Sun Valley, NV’s Rich Innis led the opening lap before points leader Ray Molina of Roseville used the outside line to lead lap four. Innis took the position back on lap five and 2021 champion Matthew Fuhs took second from Molina as the field entered traffic. Fuhs became the third different leader on lap eight with an outside maneuver on Innis.

A lap ten caution allowed Roseville’s Nathan Cleaver to enter the battles, using a pair of three-wide passes to take second. Cleaver then went under the 16.5 second breakout rule, having to pull over and come to a stop. He rejoined in ninth. Shotgun starter Mario Novelli advanced to third by that stage while Molina challenged Fuhs for the lead. A caution lap 30 bunched the field up for the final 10 lap sprint. Novelli battled Fuhs for the lead but the duo got together in turn four to bring out a caution flag. Sproule used the outside to take over the top spot on the restart around Molina.

15-year-old Lane Anderson of Fort Bragg won his second-consecutive 30-lap Jr. Late Model race. He passed his points leading cousin Trey Daniels on lap 11 for the position and brought 10-year-old Vito Cancilla of Martinez with him. Daniels had to settle for third followed by Mini Cup champions Colton Nelson and Bella Thomsen.

For the first time at a NASCAR race in Roseville, drivers from Outlaw Drift showed off high-speed, precision driving around the one-third mile speedway. Roseville’s Evan Bogovich was one of the competitors who participated in the event which was well-received by the crowd.