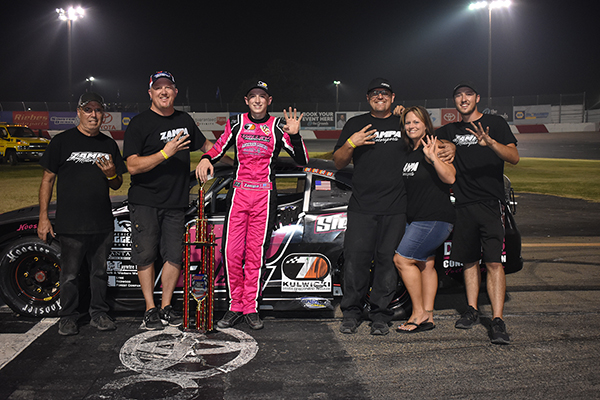 The first 50-lap affair started 16 cars on the one-third mile with points leader Thomas Martin of Auburn and Irwindale points leader Dean Thompson sharing the front row. The ran side-by-side for the first six laps before Thompson clinched the lead. Martin slipped backwards to sixth before the first caution fell for Roseville’s Lance Halm stopped on the front stretch on lap 27. Thompson picked the inside on the following restart with teammate Trevor Huddleston advancing into second past Aidan Daniels of Fort Bragg.

Huddleston muscled past his teammate Thompson into turn one, taking the lead on lap 38. Zampa followed Huddleston into second. Zampa then took over the lead on lap 42 before a caution for Chris Scribner of Loomis stopped in turn two. Zampa held the lead on the restart followed by a red flag for Lakeport’s Scott Sabol slamming the turn one wall. Huddleston used the outside to lead laps 44 and 45 but Zampa made the inside work for the decisive pass for the win on lap 46. John and Cole Moore finished third and fourth with Thompson rounding out the top-five.

An eight-car inversion allowed Loomis’ Michael Mitchell to lead the start of the second 50-lap contest. Calamity ensued when Daniels and John Moore collided in turn one on lap five, causing damage for Huddleston, Cole Moore, and Halm in a multi-car skirmish that followed.

Thompson took the lead on the restart before a pair of cautions tightened the field. Cole Moore entered the picture, using the inside to take second on lap 14. Zampa took the second position from Moore a lap later. Zampa ran down Thompson, diving inside of him in turn one to take the lead on lap 24. Zampa then spun after contact from Thompson in turn three which brought out the caution.

As the race leader, Zampa was protected by track rules to maintain the lead while Thompson was relegated to restart at the rear. Halm spun in turn two into the right side of Thompson for a caution on lap 40. The incident set up a green-white-checkered finish due to race time remaining. Zampa and Cole Moore crossed each other over during the final laps before Moore bounced off Zampa’s door coming to the stripe. Zampa prevailed for his fourth win of the season as Moore spun into the infield. John Moore, Calin Hegje, Martin, and Thompson made up the top-five finishers.

2020 Jaws Gear & Axle Modified champion Jason Philpot picked up his first win of the year in a duel with 2021 points leader Eric Price. Windsor’s Sammy Nuno led the way with a caution on lap eight for Philpot and Ralph Bailey of Colfax colliding in turn two. Price used the outside of Nuno to lead lap 11 before Nuno narrowly led laps 12 and 13 before he could clear Price on lap 14. Cautions fell on lap 19 for a flat tire for Fair Oaks’ Mike Stahl. Philpot had slightly edged Price for second before the caution. Philpot restarted outside Nuno and took the lead on lap 22. A spin for Tyler Wentworth set up a four-lap shootout between Philpot and Price. Philpot won ahead of Price, Bailey, Wentworth, and Cody Bailey.

2020 Mini Cup/Bando champion Bella Thomsen of El Dorado Hills withstood a race long battle with 2021 points leader Colton Nelson of Auburn for her first 2021 checkered flag. Thomsen took the lead on lap three and saw Nelson challenge from the outside line on numerous occasions. Nelson used the inside to get the top spot on laps 11 through 13, before Thomsen found a way back to the lead in lapped traffic on lap 14. Lucas Burton, Dayton Broyles of Auburn, and Lincoln’s Anthony Bean followed them to the finish.

Josh Whitfield of Roseville won his seventh Riebes Auto Parts Super Stock main event of the season. 2020 champion Andrew Peeler, Gary Eisenhour and Jeremy Fritts rounded out the finishers. Kenna Mitchell led all but one lap on the way to her fourth 2021 Jr. Late Model victory followed by Lane Anderson and Trey Daniels from Fort Bragg.

The Gunslinger Sprint Cars made their debut with a 20-lap exhibition race. They also attempted to break the Sprint Car track record with their winged machines aiming at the 12.180 mark set by Kody Swanson in 2009 in USAC wingless competition. Swanson’s record remains after Mark Pyle ran a 12.346 to lead Gunslinger qualifying. Clovis’ Austin Carter held off Pyle by a nose for the exciting feature win with Kingsburg’s KJ Snow, Oakley’s Jacob Tuttle, and Justin Kawahata of Clovis rounding out the top-five.

All American Speedway powered by Roseville Toyota returns to action with the NASCAR Advance Auto Parts Weekly Series on September 11. The Tribute to Heroes will include another action-packed Riebes Auto Parts Trailer Bash!  Tickets will be available at www.AllAmericanSpeedway.com