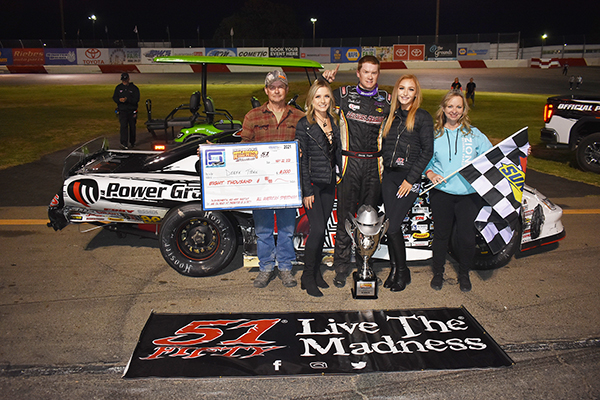 Thorn won the pole by .039 seconds over fellow Bakersfield driver Buddy Shepherd, and a straight up start placed them on the front row. None of the top eight starters opted to go to the rear for a chance at a $5,000 bonus if they could triumph at the end.

Shepherd found his way to the inside of Thorn on lap four to take the top position. A restart on lap 22 saw Shepherd pick the outside of Thorn, maintaining the lead which he held through lap 27 for a $1,000 lap leader bonus. Tracy Bolin and Cale Kanke spun in turn four on lap 38, which Cole Moore narrowly avoided. Slowing for the caution, Carlos Vieira and Kole Raz had a major incident entering turn one with head-on impact for Vieira into the turn one wall. Vieira was uninjured and Raz’s team was able to make repairs to return to the race.

A restart allowed Thorn to take the lead on lap 42 before Shepherd grabbed it back on lap 45. Shepherd, Thorn, and Jacob Gomes ran nose to tail in lapped traffic before the intensity level picked up on lap 75. Thorn crossed over Shepherd down the backstretch on lap 77 for a three-wide maneuver in traffic, with contact causing damage on the left front of Shepherd’s Camaro as Thorn took the lead.

Gomes went around the outside of Thorn to lead lap 82. Gomes looked poised to fend off Thorn for the win and earned the $1,000 bonus on lap 127. Sparks began emanating from Gomes’ machine in the closing laps. Gomes faded with a flat left rear tire, handing Thorn the decisive move for the lead on lap 143. Thorn topped Shepherd, Tucson, AZ’s Brandon Farrington, Blaine Rocha of Oakdale, and Raz at the finish.

The 51FIFTY 75 for the SPEARS Pro Late Models saw its share of drama as well. Undefeated points leader Jeremy Doss of Upper Lake added to his long list of Roseville accomplishments with the win, but his path to victory was a challenging one.

Doss led until lap 41, when NASCAR California State Champion Trevor Huddleston went up the inside on a restart for the top spot. Two-time All American Speedway Late Model champion Jason Romero nosed into the turn three wall for a caution on lap 48 and never rejoined the field. Doss used the following green flag to get the top spot back from Huddleston. Huddleston clawed back and made contact with Doss on lap 56 into turn one, sending Doss spinning and relegating both cars to the rear.

14-year-old Jake Bollman assumed the lead but lost it to Mike Lovell after a battle at the front. 2008 Altamont Raceway Park champion Jason Gilbert spun in turn two with contact from Dylan Zampa of Napa with 13 laps remaining. Doss and Huddleston had a full contact battle on lap 66 through turns three and four, with Bakersfield’s Seth Wise getting spun trying to avoid them.

Bollman took the lead back from Lovell on the restart before a huge incident in turn four. Bollman slowed and was hit by Lovell, stacking up several cars in turn four including Dylan Zampa, Las Vegas’ Tanner Reif, and Huddleston.

Doss emerged from the red flag with the lead which he never relinquished to continue his undefeated season. Cole Brown, Wise, Lovell, and Hans Beeler rounded out the top-five finishers.

The TopCartGolf.com 75 for the Spears Manufacturing Modifieds was the debut race for the southwest-based series in Roseville, with several Jaws Modifieds joining to battle the touring drivers. Sacramento’s Kris Price used his crate-engined car to lead the early laps. All American Speedway points leader Eric Price took over on lap 22 with Travis McCullough of Lodi moving past Kris Price for second on lap 26.

McCullough mounted a challenge to Eric Price, going up the inside to lead lap 45. The Prices then battled for second before they collided in turn two on lap 55 for a caution. McCullough fended off Hesperia’s Eddie Secord for the win, with Eric Price charging back to finish third. Las Vegas’ Sam Jacks and Andrew Anderson were the top-five.

All American Speedway returns to action on June 12 with a full slate of NASCAR Advance Auto Parts Weekly racing plus the Riebes Auto Parts Trailer Bash! Tickets will be available soon at www.AllAmericanSpeedway.com