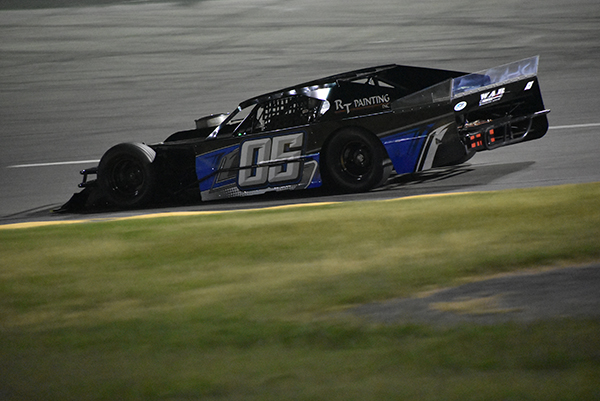 ROSEVILLE, Calif. (August 31, 2019) – Corey Englehardt of Granite Bay won his third NASCAR Modified feature at All American Speedway in 2019, closing within ten points of the series championship during Saturday’s Whelen Engineering Night. Englehardt’s victory puts him in striking distance of Loomis’ Nick Lyons with just two points nights remaining at the one-third mile asphalt oval. The win came against the largest field of the season with 14 cars competing in the 30 lap feature.

Citrus Heights’ Matt Manolis returned to the division to lead the opening lap inside Sacramento’s Eric Price. Price led lap two from the outside, before Manolis started edging forward. He finally cleared Price on lap five with Price being shuffled back to fourth.

An incident on lap nine allowed Kris Price to have a shot for the lead, driving outside of Manolis. Manolis was tagged from behind by Englehardt in turn two, forcing a caution flag and relegating Manolis to the rear. Englehardt took advantage to grab the lead from Kris Price after a back-and-forth battle.

Ralph Bailey of Colfax had an incident entering turn three that required a red flag. When the feature continued, Englehardt again pulled away from Price. Points leader Nick Lyons eventually snookered second from Price but couldn’t close in on Englehardt. Englehardt topped Lyons, Kris Price, Eric Price, and Sammy Nuno of Windsor at the finish.

Cameron Park’s Jason Romero overcame fourth in time trials to earn his sixth NASCAR Late Model feature of the year, winning the first of the Twin 35s. Reno, NV’s Randy Hedrick had the advantage early in the running while the action was building up behind him. Jeremy Doss of Upper Lake worked to the outside of Loomis’ Michael Mitchell for third, which opened the door for fast-time qualifier John Moore of Granite Bay. Moore took third from Doss before a caution on lap nine for Cole Moore spun in turn two.

Romero used the restart to sweep past Hedrick on the outside for the lead. Cole Moore came together with Loomis’ Chris Scribner in turn three for the final caution of the race with six laps to go. Romero’s lead over the field evaporated, placing him alongside John Moore. Romero managed to make the inside line work to take the narrow .477 second win ahead of Moore, Mitchell, Doss, and Jason Aguirre.

Doss benefitted from several incidents to grab his fourth win of 2019 in the NASCAR Late Model division during the second of the Twin 35s. Cole Moore of Granite Bay took the lead from the outside front row of Scribner. The battling at the front was very intense. Scribner stayed side-by-side with Moore while Galt’s Matt Wendt looked inside down the front stretch several times for nearly three-wide maneuvers.

The action boiled over on lap four when Wendt and Scribner came together into turn one, sending them up the hill into both Moore and Aguirre. Aguirre connected with the off-ramp wall to end his night prematurely, while Scribner had to pit for repairs. Cole Moore restarted at the rear of the field as well.

Wendt assumed the lead after the melee, but he quickly surrendered the top spot to Doss. Wendt faced pressure from John Moore, Romero, and Mitchell throughout the green flag run. Moore got underneath Wendt to take second. Romero attempted to seize third but had contact from Wendt in the right rear which hooked him sideways on the front stretch. Romero narrowly avoided hitting the wall head-on before correcting and spinning slightly into the side of Randy Hedrick at the bottom of turn one. The caution waved and Romero had to restart at the back along with Wendt.

Doss made some contact with John Moore on the ensuing restart as the leaders exited turn two, bouncing Moore back to third and giving Doss a cushion over the field. Moore used a lap 22 restart to grab second from Mitchell. He stormed towards Doss but came up just a car length short at the finish. Doss took the victory over John Moore, Mitchell, Cole Moore, and Hedrick ahead of Romero.

Byron Gonzales of Lincoln extended his Super Stock winning streak to five by taking the 30 lap feature on Saturday. Points leader Andrew Peeler of Carmichael led the first four laps until Gonzales snaked underneath in turn one, clearing him at the conclusion of lap five. Chris Lambert followed him past Peeler a few laps later. Peeler had contact with Billy Ray down the front stretch but the drivers exhibited great car control and the race stayed green.

Ericka Ray spun in turn two for a caution on lap 20. On the restart, Billy Ray looked inside Lambert for second. They traded the position a few times before making contact in turn three that sent Lambert spinning. Gonzales motored away on the final restart while Chris Paulson and Dixon’s Tim Walters charged into the fray to round out the podium finishers.

Roseville’s Ray Molina won his seventh consecutive F4 feature, topping the largest field of the season with nine entries for the 20-lap race. Tim Williams led the opening lap in his debut before Molina took over. Matthew Fuhs successfully fought off Vic Theberge of Citrus Heights in a race-long duel for second position at the finish.

A season-best nine entries competed in the Mini Cup vs. Bandolero division with the top-two in the standings going head-to-head once again. For the fifth time in 2019, Trey Daniels of Fort Bragg grabbed the checkered flag first. Wyatt Sansom of Linden switched from a Mini Cup to a Bandolero car and promptly led the first four laps of the main event. Daniels took the lead on lap five while Kenna Mitchell moved into second on lap nine. Mitchell, the points leader, tried to track down Daniels but spun coming to the checkered flag. Daniels led Sansom, Auburn’s Colton Nelson in his debut race, and Mitchell as the top-four finishers.

The Legends of the Pacific presented 14 entries for their return to All American Speedway for the first time since 2017. Nick Halen of Carson City, NV made a great impression on the fans after winning his dash and the non-stop 35-lap main event. Pete Soto of Santa Clara led the first two laps. Jeremy Doss started third and advanced into the lead by lap three. Halen was not far behind, overhauling Doss just one lap later for the lead.

Doss reeled in Halen on a few occasions and made a few crossover attempts within the final 15 laps. Halen held on with Doss, fast-time qualifier Sheldon Crouse, Alex Pacheco, and Rob Nascimento the top-five finishers.

All American Speedway will return to action on September 14th for the final night of the NASCAR Whelen All-American Series state and national points battles.