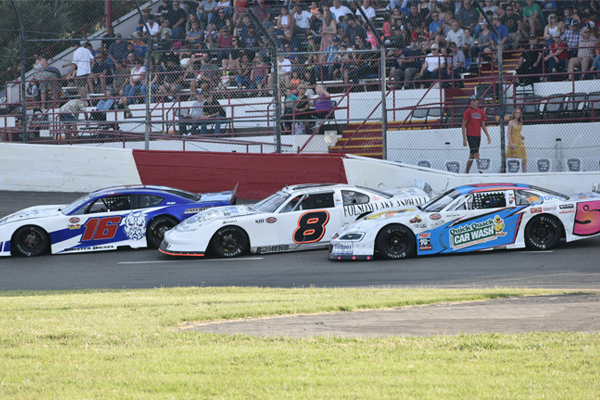 ROSEVILLE, Calif. (July 4, 2019) – Roseville’s All American Speedway returns to action on Saturday July 6th with one of the largest Independence Day celebrations in track history. The racing action will include the inaugural Cherokee Truck Tires Big Rig Rumble and the only 2019 appearance by the traveling North State Modified Series. NASCAR Whelen All-American Series local divisions will be competing, highlighted by Twin 35 lap races for the NASCAR Late Models. This exciting night will be capped by a spectacular fireworks show and led by San Francisco 49er fullback Tom Rathman as the Grand Marshal.

All military entering the event with ID will be admitted free of charge. The first 500 fans in attendance will receive their selection of free hats, t-shirts, and flags from track partners while supplies last.

The inaugural appearance for the North American Big Rig Racing Series is attracting racers from across the country and as far north as Canada to battle on the one-third mile asphalt oval. They will compete in a 30 lap main event plus a pair of eight lap heat races.

North State Modifieds travel across California with Roseville as one of the highlights of their 2019 campaign. Santa Rosa’s Cameron Austin leads the championship ahead of rookie Robbie Knittel of Lodi. Sacramento’s Jason Philpot will try to defend his home track from third in the points.

NASCAR Late Models compete at All American Speedway in their first points paying season since 2013. The car count has exploded with top stock car talent from across the West Coast going head-to-head. 2009 Roseville track champion Jason Romero of Cameron Park has one win this year while Madera’s all-time winningest driver Matt Erickson has two victories.

Former SRL champion Jeremy Doss of Upperlake, CA won the second of the Twin 35 features on June 15th, followed by a Madera win last weekend. He will look to win his third feature in a row on Saturday night. Drivers race for NASCAR national, state, and local points in Twin 35 lap features.

Weekend activities begin Friday with practice from 5 p.m. to 8:30 p.m. On Saturday, pit gates will open at 10:30 a.m. with a special Big Rig only practice at noon. North State Modified practice will follow before local practices get underway at 1:25 p.m. Time trials for the NASCAR divisions begin at 3:00 p.m. Grandstand gates will swing open at 4 p.m. and will be followed by trophy dashes. Opening ceremonies and feature events start at 6 p.m. with the fireworks show wrapping up the night at approx. 9:40 p.m.

Advanced tickets can be found on the track’s website www.AllAmericanSpeedway.com More information is available by following the track on your favorite social media accounts. Additional details are available by calling the track info line at (916) 786-2025. All American Speedway is located at 800 All America City Blvd in Roseville.