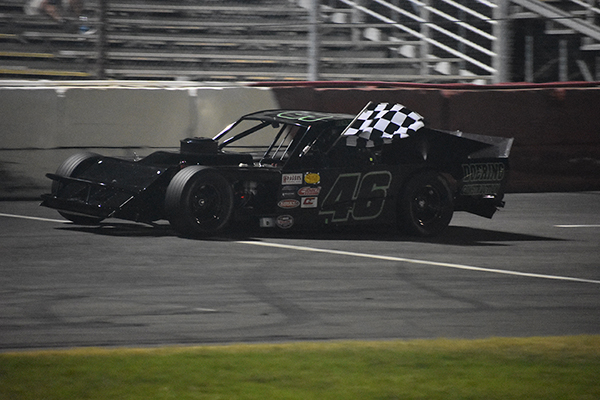 ROSEVILLE, Calif. (September 14, 2019) – Jason Romero used a pair of podium finishes to clinch the 2019 NASCAR Late Model championship at All American Speedway powered by Roseville Toyota on Saturday night. His podiums came behind victories for Cole Moore and Jeremy Doss on a warm evening in Roseville. Derrick Doering of Auburn scored his first career Modified victory as well during the action-packed night with seven main events.

All Romero needed to do in the second 35-lap main event was start the race, but he had eyes on doing much bigger things. Chris Scribner of Loomis led the first four laps before third starting Jeremy Doss took over on lap five. Lance Halm and former Daytona 500 competitor Justin Marks of Rocklin tangled in turn two for a caution on lap nine. When the race restarted, Granite Bay’s John Moore briefly challenged Doss from the outside. The battling allowed Romero to go underneath Moore to take over second.

Doss proved too strong despite Romero having open track and still 17 laps remaining in the main event. Doss darted to his fifth victory of the year by 1.275 seconds ahead of Romero, John Moore, Cole Moore, and former Madera champion Matt Erickson.

Close quarters racing among the top four continued until the only caution flew on lap 30. Cole Moore went outside Mitchell on the restart, charging past him to lead lap 31. Moore took his first win of the season with Mitchell a season-best second. Romero topped Doss for third with John Moore rounding out the top-five.

Saturday as an exciting night for Auburn’s Derrick Doering. As one of the full-time competitors in the Late Models and Modifieds, Doering won a draw to test a NASCAR K&N Pro Series, West car for Bill McAnally Racing. He followed the good fortune with starting on the outside pole for the 30-lap Modified main event. Doering took the lead and maintained it over a pair of early race restarts. Action intensified past halfway with second in points Corey Englehardt hounding Doering’s rear bumper. Doering never relented, with Englehardt eventually nearly spinning in turn four on lap 22.

Doering held off Eric Price, Jr. for the victory with points leader Nick Lyons getting past Englehardt for third. Tyler Wenworth rounded out the top-five. Lyons will lead Englehardt by a scant eight points heading into the finale on October 12th.

Dan Farrington of Roseville won his second Super Stock main event of the season, topping a 15-car turnout in the 30-lap race. Former track champion Chris Paulson of Antelope took the lead from Rocklin High School freshman Billy Ray on the opening lap. Paulson led Ray until the sixth-starting Farrington began to close. Farrington used the outside to take the lead from Paulson on lap six.

Five-time consecutive winner Byron Gonzales of Lincoln tracked down Farrington, grabbing the top spot on lap 13. Gonzales’ run for six straight wins ended when he slowed on the backstretch for a lap 22 caution. Farrington went on to win while points leader Andrew Peeler of Carmichael charged to second in the later laps. Paulson was third over Roseville’s Roy Smith and Ray.

The speedway’s best-ever field of Jr. Late Models saw a familiar winner with Aidan Daniels of Fort Bragg getting his fifth win of the year. 12 year-old Lane Anderson led the first three laps before surrendering the lead to Kylie Daniels, age 16, on lap four. Aidan Daniels took over on lap seven and brought 12 year-old Elvis Rankin of New Mexico with him.

Rankin made the most of his first-career Late Model start. He attempted on half a dozen occasions to complete a crossover pass on Daniels in turn one to no avail. A caution on lap 25 set up a five-lap sprint to the finish. Daniels persevered ahead of Rankin and 14 year-old Austin Edwards from San Bernardino County in his Roseville debut. Points leader Brody Armtrout was disqualified from the feature for leaving the post-race tech area without completing engine tech.

Ray Molina’s eighth consecutive F4 victory came with some last lap excitement. Vic Theberge of Citrus Heights and Tim Williams each led laps early on. Molina took over on lap five. Matthew Fuhs closed-down on his father in the closing stages of the race. Molina bumped Billy Clark while lapping him on the final corner. Clark spun, collecting Fuhs in the process. Molina’s win stood with Williams and Reno, NV’s Rich Innis snaking through to be the top-three finishers.

Trey Daniels of Fort Bragg used a come from behind win for his sixth Bandolero vs. Mini Cup feature victory. Daniels led the first 16 laps with points rival Kenna Mitchell of Loomis and Linden’s Wyatt Sansom in tow. Mitchell jumped inside Daniels into turn one, sending them both spinning. Sansom assumed the lead until the caution flew again on lap 18. Daniels found something extra to power past Sansom to win the 20-lap feature with Mitchell finishing second ahead of Sansom, Hannah Ray, and Bella Thomsen.

All American Speedway returns on October 12th with the NASCAR K&N Pro Series, West “NAPA Auto Parts/Eneos 150” plus the track championship finales for all six weekly divisions and the Legends of the Pacific. Tickets are on sale now for this major stock car event.