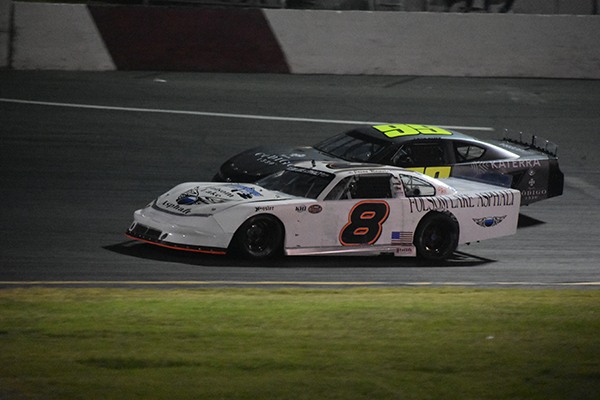 Doss’ run from fifth on the grid took a bit longer, moving past Modesto’s Jason Aguirre for third on lap eight. He then passed Scribner for second on lap 11. Romero’s lead was already significant by that point, and he never relented. Romero eventually accumulated a 6.075 second advantage, lapping all but the top-five cars. Romero lapped both Marks and incoming second in points Mitchell. Romero topped Doss, Scribner, Aguirre, and Elk Grove’s Ron Chunn at the finish.

The field was inverted eight from the first twin finish, but a rear end issue for Mitchell along Aiden Daniels electing to start at the rear adjusted the order. Doss and Romero started from the third row as a result. Chunn and Marks went side-by-side early for the lead, before Aguirre entered the frame. Aguirre took over the top spot on lap four while Romero charged forward. Romero raced to the lead past Aguirre on lap nine.

Romero started to pull away for the pack again while Doss battled with Chunn for the third position. Doss finally took over third on lap 23 but couldn’t get to Aguirre for second. Romero won his fifth race of the year by four seconds ahead of Aguirre, Doss, Chunn, and Scribner.

Like the Late Model action, the NASCAR Modifieds competition also went non-stop for their 30-lap contest. Points leader Nick Lyons added to his advantage by pacing the entire distance.

Lyons had company throughout the race in the form of Michael Mitchell, driving his own car but carrying the #05 for points for Corey Englehardt. Mitchell and Lyons ran nose-to-tail for much of the race including through lapped traffic. Lyons held on for victory with Mitchell earning second position. Willits’ Mike Lovell ran third in his 2019 debut while Tyler Wentworth finished fourth ahead of pole sitter Ralph Bailey.

Lincoln’s Byron Gonzales won his fourth consecutive Super Stock contest in a fast-paced 30 lap race. Chris Paulson led lap one before Rocklin High School freshman Billy Ray led lap two from the outside pole. Points leader Dan Farrington of Roseville used the outside to take the lead on lap four. Ray edged back into the lead on lap five before Farrington cleared him for lap six. Ray found himself briefly in a three-wide battle for second.

Gonzales broke free from the pack to challenge Farrington. On lap 13, he made his move to the top spot using the outside line. Andrew Peeler advanced to second on lap 17. The lone caution of the race flew on lap 18, but Peeler was unable to capitalize. Farrington retired to the pits under the caution as well. Gonzales led Peeler, Ray, Paulson, and Tony Latimer as the top-five finishers.

Fuhs stormed to the lead on the restart and led until lap 11, when Molina worked his way inside to lead lap 12. Fuhs went back to the lead on lap 14 before Molina led lap 15. Molina held on during the final five laps for a narrow win over Fuhs and Theberge.

Kenna Mitchell of Loomis won her second Mini Cup vs. Bandolero main event, again in a close battle with points leader Trey Daniels of Fort Bragg. Mitchell led almost the entire feature with Daniels in tow. Daniels leaned on Mitchell exiting turn four to lead lap 17, but Mitchell hustled into turn one to take the spot back. Daniels was unable to answer back and finished second, while Bella Thomsen finished third.

Jr. Late Model points leader Brody Armtrout, age 13, won a back and forth race with Aiden Daniels as well.

All American Speedway will return to action on August 31st with NASCAR Whelen All-American Series racing plus the Legends of the Pacific.