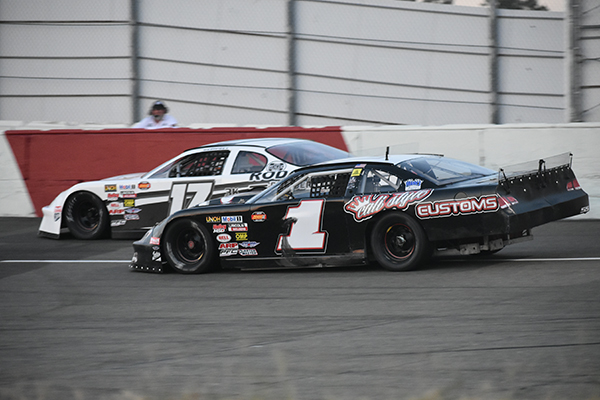 Race fans can purchase their live viewing pass for the NASCAR events for $19.99 in high definition. Events get underway at 5:00 pm Pacific. The pass is also good for 30 days after the event to view it on demand. COVID-19 Protocols will be strictly enforced this weekend for this competitor-only event.

The JM Environmental 150 for the SPEARS SRL Southwest Tour is also on the card, with that main event closing the evening of racing. A separate PPV will be required for the SRL events at www.SpearsRacing.TV

All American Speedway kicked off its long overdue start to its 66th season on August 1. Granite Bay’s Cole Moore picked up where he left off nine months ago, as the winner of the November 2019 JM 100 swept both Late Model features in the 2020 opener. The Jaws Gear & Axle Modifieds saw Jason Philpot drive ahead of Michael Mitchell for victory.

In Super Stocks, Jill Schmidt worked her way past 2019 champion Andrew Peeler for the win. The F4 division also saw their defending champion come home in second, as Nevada’s Rich Innis won ahead of a last-lap bid from 2019 champ Ray Molina.

The youngest drivers at the speedway compete in the Jr. Late Models and the Mini Cup/Bandos. 2019 Bandolero champion Kenna Mitchell won that feature then appeared poised to take the Jr. LM win as well. Her spin from the lead handed the victory to the 2019 Jr. LM series runner-up Aidan Daniels.

The 2020 season includes additional events on August 29, September 12, September 26, and the October Classic on October 10. Touring stock car racing includes the SPEARS SRL Southwest Tour on both August 15 and September 26 along with the ARCA Menards Series West on October 10.

Drivers will be required to fill out a COVID-19 waiver and questionnaire. All forms are available at www.AllAmericanSpeedway.com Friday night practice will see gates open at 2:00 pm with the track hot from 3:30 pm to 8:00 pm. On Saturday, pit gates open at 10:00 am with practice beginning at 12:30 pm. Opening ceremonies will be at 5:00 pm with main events to follow. Just Kickin’ It will be the concessionaire for the pits all weekend with their delicious tacos for sale on Saturday.