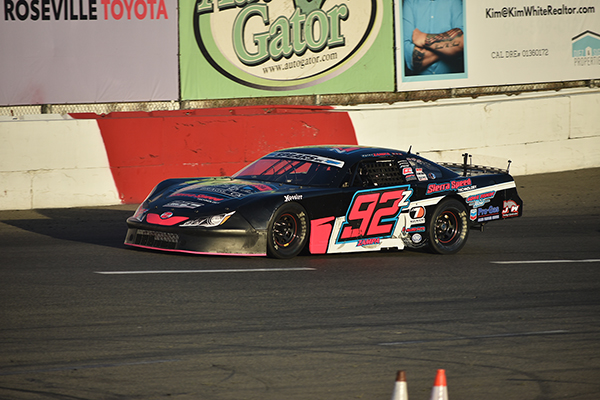 ROSEVILLE, Calif. (May 15, 2022) – The sizzling hot start to the 2022 NASCAR Berco Redwood Late Model season for Napa’s Dylan Zampa continued Saturday night during All American Speedway’s Armed Forces Night, with Zampa sweeping the twin 35-lap features to extend his record to five and zero on the year. North Highlands’ Rick Andersen and Roseville’s Josh Whitfield continued perfect starts to their campaigns as well during an eight-main event card @the Grounds powered by Roseville Toyota. Photo by Patriot Media

Zampa started eighth for the nightcap after winning the opener earlier in the evening. He marched through the field, passing Loomis’ Michael Mitchell for third on lap 12 and then working past 2021 Modified champion Eric Price, Jr. for second on lap 15. Passing 2021 Late Model champion John Moore of Granite Bay for the lead was a larger challenge. Zampa tried several crossover attempts on both ends of the one-third mile speedway.

Zampa finally cleared Moore with a crossover on lap 25. The race was not over yet as 2021 Jr. Late Model champion Kenna Mitchell of Loomis tangled with Price for third in turn one requiring a caution on lap 27. 2020 Jr. Late Model champion Aidan Daniels of Fort Bragg spun on the frontstretch to set up a an additional caution and a four-lap shootout. Zampa was undeterred, charging ahead to top Moore, Auburn’s Thomas Martin, Michael Mitchell, and Price.

“It’s a stout field and everyone, to me, felt close in that race. Just glad that Eric (Price) and John (Moore) ran me clean and I hope we can do it next time we come here,” Zampa said.

The first 35-lap feature opened with battling between Daniels and Henk Gaalswyk, Jr. of Ripon. After racing side-by-side the race went under yellow on lap two when Kylie Daniels of Fort Bragg spun on the frontstretch and collected Moore.

The battling continued with Aidan Daniels taking the lead from Gaalswyk. Thomas Martin dove inside Daniels in turn one for the lead on lap 14 but the caution flew for Eric Price spinning in turn four. Daniels battled inside Martin for the lead on the restart with Kenna Mitchell and Zampa in the mix in a two-by-two formation on lap 20.

Martin got sideways in turn one on lap 22 setting up a three-wide duel that allowed Daniels to clear for the lead on lap 23 and brought Zampa with him. David Lewellen of Modesto backed into the wall in turn one to require a red flag on lap 24 but the driver was uninjured.

Zampa seized the lead around the outside of Aidan Daniels on the restart and never relinquished it for the victory. Kenna Mitchell worked her way past Daniels for second with Michael Mitchell and Martin rounding out the top-five.

Eureka’s Brandon White charged from eighth on the grid to go outside of Blackwood for third. White spun into turn three as he dove inside Andersen to bring out a caution on lap 27.

Like Zampa’s win earlier, Andersen took advantage of the opportunity to start outside of Wentworth and grabbed the lead. Wentworth settled for second over Windsor’s Sammy Nuno, Colfax’s Ralph Bailey, and Roseville’s Cody Rickard.

Roseville drivers had success in the F4 division as well with 2020 champion Ray Molina driving back to victory lane over a 16-car field. A frantic race saw numerous lead changes at the front of the field. Nevada’s Rich Innis led the opening laps with challenges from Roseville’s Nathan Cleaver on the inside. Cleaver took the lead on lap five before Vikki Theberge of Citrus Heights spun in turn two. The field safely steered around her as the caution flew.

Cleaver and Innis raced for the lead again on the restart with Innis using the high side to lead lap 12 before Cleaver battled back to lead lap 13. The lead pack went four abreast through lapped traffic allowing Innis to drive into the lead on lap 14. 2021 champion Matthew Fuhs suffered a flat tire after contact lapping Theberge on the following lap.

Stephanie Ziebell stopped in turn one to bring out another caution on lap 15. Molina went around the outside of Innis to take the lead on lap 17. Mario Novelli went up in smoke which required a red flag that ended the event prematurely on lap 17. Molina topped Innis, Cleaver, Rocklin’s John Sproule, and Woodland’s Timm Williams at the finish.

After a few restart attempts, the race went green. The second lap featured a multi-car skirmish on the front stretch, however. 10-year-old Vito Cancilla of Martinez, Trey Daniels of Fort Bragg, and Colton Nelson of Auburn went three-wide and tangled. The incident ended the event for the 2021 Mini Cup champion Nelson.

Hand drove around the outside of Thomsen to take the lead on the restart. Hand led Cancilla, Thomsen, Daniels, and Roseville’s Connor West across the finish line.

Roseville’s Dayton Broyles had an electrifying win in the 15-lap Mini Cup/Bandolero feature. Broyles raced hard with Stockton’s Lucas Burton on April 9th and that battling continued May 14. Broyles tracked down Burton over the final five laps and passed him on the final circuit for the win. Leilani Sprenkel and Cash Page of Meadow Vista rounded out the field.

Quinter Pittillo of North Highlands topped a field of ten drivers for the $1,000 Riebes Auto Parts Trailer Bash triumph. Alan Bridgman of Lincoln was voted as the $250 Master of Disaster in the Shark Car while Eric Bocksberger won the $250 Best Looking Trailer with his Batman-themed machine.