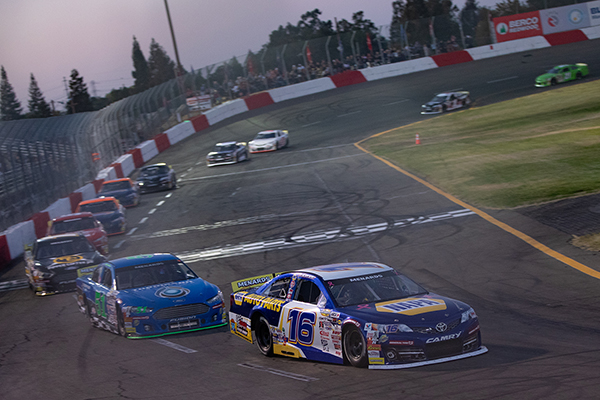 ROSEVILLE, Calif. (September 20, 2022) – The NASCAR ARCA Menards Series West roars into Roseville on October 1 for the NAPA AUTO PARTS 150 presented by Berco Redwood at All American Speedway powered by Roseville Toyota. The 24th nationally televised appearance of the West Series will be joined by four local championship races and the return of the Legends Tour Series. Over 300 laps of racing are scheduled on the one-third mile speedway located @the Grounds, for one of the largest single day sporting events in Placer County. Photo by Diego Alvarado

The speedway will honor first responders who were part of the local firefighting efforts. They helped reopen the fairgrounds for this annual NASCAR tradition in Roseville.

Grandstands open at 4pm followed by heat races at 4:30pm. Five preliminary main events of action will get underway at approx. 5:05pm. They precede the NAPA 150, which goes green at 7:45pm Tickets for the NAPA AUTO PARTS 150 are available online at www.AllAmericanSpeedway.com Adult general admission tickets are $35 while juniors ages 6-12 are $25. Kids 5 & under are free! Race fans can also purchase a VIP ticket for $65 which includes a Randy Peters Catering BBQ dinner with 2 drinks, live music, special gift, VIP Pit Tours, a meet and greet with drivers, and special reserved seating in turns one and four.

The ARCA Menards Series West race will serve as the ninth round of the 11-race series. Southern California driver Jake Drew of Fullerton leads the championship on the strength of four wins in the last five races in the series. His rookie teammate Tanner Reif of Las Vegas has also scored two wins this season.

The series utilizes 625hp stock cars which have competed at All American Speedway since 1977 including the upcoming 24th appearance. Bill McAnally Racing leads all teams with nine victories at its home track along with back-to-back series championships in 2020 and 2021. 2020 All American Speedway Late Model track champion Cole Moore of Granite Bay and series rookie Landen Lewis of Ocean Isle Beach, N.C. will drive the BMR Chevrolets in the coveted race.

Legends Tour Series will race for $2,000-to-win in their first series start at the track since 2019. Legends machines are 5/8ths scale versions of NASCAR Modifieds from the past. These unique cars bring large fields and this year’s visit is no exception. Drivers will be racing for not only Legends Tour Series points but also state and national points. The 35-lap main event will also serve as a regional championship as well. A lucrative $750-to-win, 15-lap B Main is also planned. Sebastopol’s Cody Winchel leads the series standings with October 1 serving as the penultimate round of their touring championship.

The tightest battle has been in the Foothills Tow Modified division. Eureka’s Brandon White leads North Highlands’ Rick Andersen by only eight points with each driver earning three wins. Roseville’s Tyler Wentworth is winless but has used consistency to stay within 20-points of the championship. Windsor’s Sammy Nuno and Colfax’s Cody Bailey round out the top-five heading into the 30-lap main event.

Ray Molina of Roseville has increased his points lead in the F4 division to a 25-point lead over Citrus Heights’ Vic Theberge. Rocklin’s John Sproule is well within striking distance at just 29-points out of the lead. 2021 champion Matthew Fuhs and Sun Valley, Nevada’s Rich Innis make up the rest of the top-five. The division with the largest car counts this year in Roseville will race in a 25-lap feature. $1,000 in bonus money will be up for grabs in the season finale

All American Speedway’s youngest drivers compete in the Mini Cup/Bando division with a 15-lap main event planned. Roseville’s Dayton Broyles looks to close out the championship with a 50-point lead over Stockton sixth grader Lucas Burton. Burton has the edge in main event wins with four wins to Broyles’ two. Meadow Vista’s Cash Page runs third in the standings during his rookie campaign.

Action gets underway on Friday with practice for the NASCAR Weekly Series and ride alongs for VIPs in the NAPA AUTO PARTS Chevrolet SS. On Saturday, practice begins at 12:05pm for the NASCAR Weekly Series and Legends Tour Series. The ARCA Menards Series West will have a combined practice and qualifying session from 3:15pm to 4:30pm. Grandstand gates open at 4pm with heat races beginning at 4:30pm followed by five local championship main events. Opening ceremonies for the NAPA AUTO PARTS 150 begin at 7:15pm with the green flag scheduled for 7:45pm