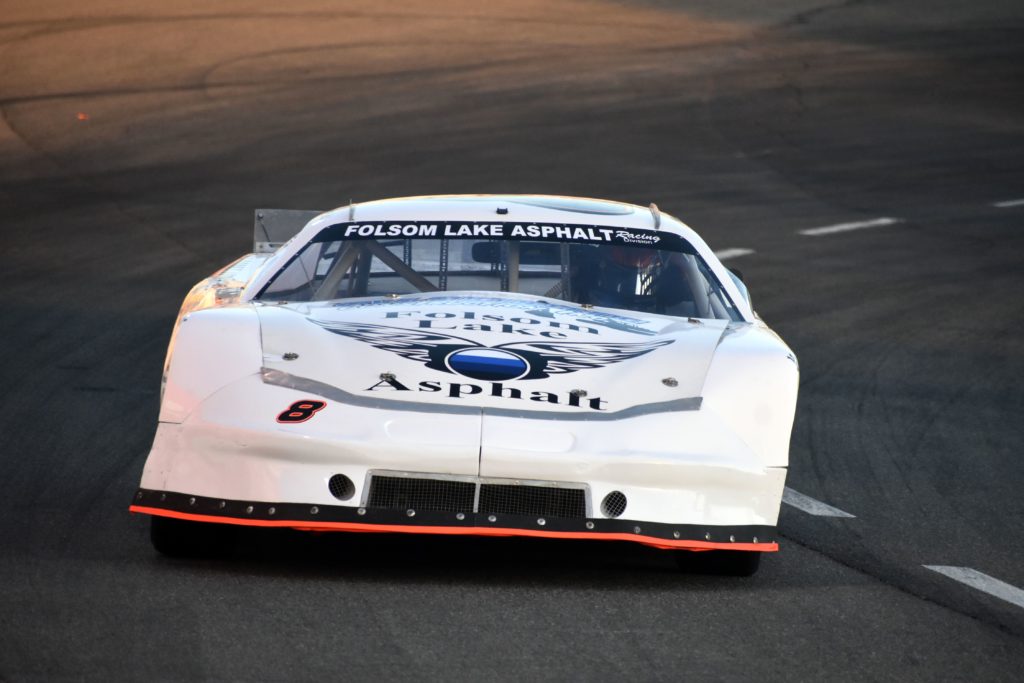 ROSEVILLE, Calif. (July 7, 2019) – Jason Romero got the victory he savored while battling with some tough competition, outfoxing Jeremy Doss in lapped traffic to win the second half of the NASCAR Late Model Twin 35s at All American Speedway on Saturday. Another strong turnout of fans in Roseville witnessed a busy night that included the Cherokee Tires Big Rig Rumble, North State Modified Series, and two hotly contested Late Model features.

Romero’s win along with Michael Mitchell’s tough night narrows the points battle among them at the one-third mile asphalt oval as well.

The first Twin 35 started 16 of the 17 competitors on hand with an eight-car inversion lining up Romero and fast-timer Doss on the fourth row. 2018 Madera Late Model champion Jason Aguirre took the lead, sweeping past Rocklin’s Justin Marks, a former Daytona 500 starter. Aguirre raced out to a five-car length advantage while Marks was eventually freight trained to the sixth spot.

Granite Bay’s John Moore took over second from Galt’s Matt Wendt on lap nine with Doss passing them both by lap 13. Rick Scribner topped at the top of turn three for a caution flag on that same lap. When racing resumed, Doss went around the outside of Aguirre to take the lead.

Romero advanced to second just two laps later and they ran nose-to-tail over the final half of the event. Doss won his third consecutive California Late Model race over Romero, Aguirre, Moore, and Wendt.

The second feature was a much more decisive victory by Romero. Mitchell led the first five laps before he was drifted backwards. 14 year-old Jadan Walbridge of Portland, OR took the lead on lap six with Romero and Doss pulling up behind him. Romero and Doss charged past him on lap ten.

Mitchell went backwards as far as eleventh while Romero built up a sizeable advantage over Doss. The advantage waivered only slightly in lapped traffic during the non-stop event, with Romero earning his second victory of the year by five car lengths ahead of Doss. Aguirre was third over a best career finish of fourth for Walbridge, with Moore making up the balance of the top-five.

In the North American Big Rig Racing Series, their Cherokee Truck Tires Rumble started off with a bang when Jaeger Berdahl wrecked hard in the heat race entering turn three. The driver from Eckville, Alberta, Canada was uninjured.

The 30-lap feature started eight trucks and saw Victoria, British Columbia, Canada’s Glen Creed dominate en route to victory. Non-stop action for the second position throughout the event saw Cole Wiesner of Calgary, Alberta break free from the pack but he ran out of laps to catch Creed. Darren Berdahl won the battle for third in a narrow finish.

The North State Modified Series made their only appearance in Roseville for the 2019 season with a fast-paced 60 lap main event. Kelseyville’s Donovan Cox won the Lucas Oil Dash for $100 and then led the field to green. Cox led the opening lap before three-time champion Darin Knight used the outside line to lead lap two. Roseville’s Terry Deal spun in turn two for a caution on lap four. Points leader Cameron Austin of Santa Rosa used the yellow to sweep around Knight on the outside to lead lap five.

Knight and Jason Philpot of Sacramento raced side-by-side for several laps before a caution for Cox hitting the infield tires on the backstretch. The pair switched positions with Philpot now inside Knight, which Knight used to clear him for second. Deal spun again with 14 to go which gave Knight a shot at Austin. Austin proved too strong as he motored away for his first 2019 win ahead of Knight, fast-time qualifier Scott Winters, Darin Sullivan, and Philpot.

Byron Gonzales of Lincoln continued to enjoy success with his new crate engine, winning the 30 lap NASCAR Super Stock contest. 15 cars took the green flag with the father and son duo of Billy Ray and past track champ Erick Ray at the front. Billy led the opening nine laps before Erick took over on the inside on lap ten. Billy edged back into the lead before Erick and Andrew Peeler had contact exiting turn two, forcing a lap 12 caution and ending Peeler’s race.

Chris Lambert grabbed the lead on lap 18 with Gonzales advancing to second. Gonzales went around the outside of Lambert to lead lap 21 after a restart and he never looked back over the final nine laps. Lambert was second ahead of Erick Ray with Roseville’s Roy Smith running fourth in his 2019 debut.

The young drivers in the Mini Cups vs. Bandoleros impressed the large crowd with a back-and-forth race. Fort Bragg’s Trey Daniels, age 10, drove fifth to first on the opening lap. The only yellow flag came out on lap five for a spin in turn four. When things resumed, Daniels held a narrow lead over Kenna Mitchell of Loomis.

Kenna used a three-wide pass in lapped traffic to assume the lead on lap 12. Daniels stayed glued to her rear bumper, reassuming the lead on lap 15 in turn one. Daniels topped Mitchell by a nose in a drag race to the checkered flag while Linden’s Wyatt Sansom was third.

Roseville’s Ray Molina is still perfect in the F4 division in 2019, this time winning over an eight car field. John Trunbull of Fair Oaks led early before Nevada’s Rich Innis anchored the field. Innis lead was short lived as Molina tried the outside then crossed him over down the backstretch to lead lap six. Molina, Matthew Fuhs, and Innis were the top-three finishers.

Brody Armtrout debuted a new car in the Jr. Late Model division with the 13 year-old driver winning both the dash and the 20 lap main event. Armtrout topped 12-year olds Hailey Liles and Lane Anderson at the finish.

All American Speedway takes a week off before returning on July 20th for more NASCAR Home Tracks action plus another exciting Reibes Auto Parts Trailer Bash.