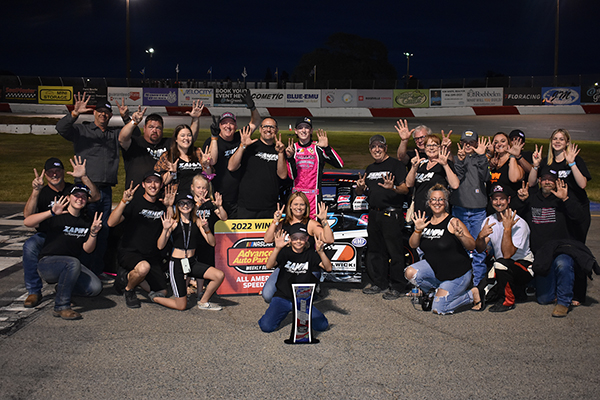 After winning the first feature, Zampa lined up in the eighth position for the second feature per NASCAR procedures. 2019 Jr. Late Model champion Brody Armtrout of Smartsville made a strong return to Roseville, going around the outside of Ripon’s Henk Gaalswyk, Jr. to lead lap one. Fort Bragg’s Aidan Daniels slammed the backstretch wall to bring out a caution on lap three. Auburn’s Thomas Martin reeled in Armtrout after starting fifth, taking over the lead on lap 17. Zampa worked his way up to third as well. Zampa then passed Armtrout for second on lap 26.

The lead for Martin appeared insurmountable for Zampa until Fort Bragg’s Lane Anderson spun in turn four, setting up a restart with six laps remaining. Martin picked the inside and the pair ran side-by-side. Zampa executed a cross over exiting turn four, diving inside to lead lap 33. Zampa earned the victory over Martin, 2021 Jr. Late Model champion Kenna Mitchell of Loomis, Armtrout, and Gaalswyk.

Saturday’s opening 35-lap salvo saw Michael Mitchell take the initial lead around the outside of Daniels. Anderson spun across the backstretch with Armtrout making minor contact with the spinning car to require a caution. Zampa edged to the inside of Mitchell on the restart and grabbed possession of the lead by lap ten. Martin and Mitchell had a furious battle for second that boiled over with contact in turn four, allowing Price to drive around the outside of them for the position on lap 23. Kenna Mitchell surged past Price in the late laps to finish second. Zampa, Kenna Mitchell, Price, Martin, and Daniels were the top-five finishers.

Eureka’s Brandon White found his way back to Velocity Solar Victory Lane in the Foothills Tow Modifieds. White started fourth after taking fast-time in time trials. Scot Alves jumped out to the lead before the race was slowed by a significant crash for Ralph Bailey of Colfax on the backstretch. Rocklin’s Tyler Wentworth also suffered damage but was able to continue. White had a great launch on the restart, driving around the outside of Alves for the lead. White led Alves across the line with Wentworth fending off points leader Rick Andersen of North Highlands for third. Tyler Mullican rounded out the top-five.

Roseville’s Josh Whitfield led all 30-laps for the Riebes Auto Parts Super Stocks victory. The action was stopped with a red flag on lap seven for former champion Andrew Peeler hitting the turn three wall after an apparent stuck throttle. He was uninjured. Modified winner White drove past Roseville’s Phil Wilkins at the start. A caution on lap 15 brought the field back together briefly but Whitfield drove ahead for his fourth win of the year over White, Wilkins, Galt’s Larry Thornhill, and Antelope’s Terry Thomas, Jr.

2021 F4 champion Matthew Fuhs of Roseville topped a 15-car field for the 25-lap feature win. Rocklin’s John Sproule used the outside to get the top position. The top-seven drivers ran under a blanket all throughout the event. Sproule faltered on lap 12 with a dropped cylinder in the engine, allowing Fuhs to take over the lead. Fuhs approached ferocious lapped traffic during the final two laps but managed to maintain the lead, topping Roseville’s Ray Molina for a close win. Fuhs’ win paid $500 to win as part of $1000 in bonus cash offered by J&J Smith RV and Boat Storage for the F4 competitors!

10-year-old Vito Cancilla of Martinez took advantage of a collision between the leaders to earn his first-career Jr. Late Model feature win. May 14 winner Chase Hand of Sacramento led the opening lap followed by Fort Bragg’s Lane Anderson. Both Cancilla and 2020 Mini Cup champion Bella Thomsen of El Dorado Hills suffered spins for cautions early in the race. Anderson tracked down Hand to take over the lead on lap 25. The caution flew a lap later for 2021 Mini Cup champion Colton Nelson of Auburn spinning on the front stretch.

Hand attempted to go inside Anderson in turn one for the lead on the restart. The pair tangled, with Cancilla driving up against the wall in a three-wide maneuver to swoop past for the top spot. Cancilla never relinquished the position for the triumph, leading Hand across the line. Anderson slowed in the incident with Trey Daniels of Fort Bragg scored third ahead of Nelson and Anderson.